Back to Godhead > Society > A Mantra To Cure Madness

A Mantra To Cure Madness

A Mantra To Cure Madness 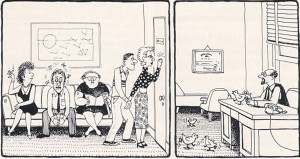 Recently, the front page of the International Herald Tribune carried the headline “One in 5 Americans Is Mentally ill, Study Finds.” The article described a government-sponsored survey consisting of extensive interviews by the National Institute of Mental Health with ten thousand adults. Findings were based on strict criteria for mental disorder, and a mentally ill person was determined as “one in need of professional help.” The article said, “Nationwide projection of the data indicated that 18.7 percent of the adult population suffers from at least one disorder of mental health. Anxiety disorders were found most common, affecting 8.3 percent of adults. Substance-abuse disorders, including alcohol abuse, were next at 6.4 percent.”

Whether determined by statistical study or by commonsense observation, whether in America or in any other modern culture, clearly mental illness is on the rise—a fact we take more or less for granted as a part of today’s way of life. Mental disorder is listed in the Vedic scripture Srimad-Bhagavatam (1.1.10) as one of the common characteristics of people in the present age: “In this iron age of Kali, men have but short lives. They are quarrelsome, lazy, misguided, unlucky and, above all, always disturbed.”

His Divine Grace A.C. Bhaktivedanta Swami Prabhupada, the founder and spiritual master of the Hare Krsna movement, proposed using a Vedic standard in determining mental disorder. His criterion was that anyone who identifies with the temporary material body, and thus works only for the satisfaction of the body and its extensions, disregarding the needs of the soul, is to be considered mentally ill. This definition of mental derangement fits practically everyone, indicating that the study by the National Institute of Mental Health found only the tip of the iceberg.

While the National Institute of Mental Health recognizes our growing need for professional help, today’s psychologists and psychiatrists are not fully qualified, because they lack a proper understanding of the spiritual malaise at the root of all mental disturbances. That malaise is ignorance of the spirit soul, our eternal self.

A sane proposal, therefore, is that mental health officials consult pure devotees of Lord Krsna. The devotees are aware of the Vedic literature’s sure and simple prescription for regaining full mental health: chanting the holy names of God. The Srimad-Bhagavatam (12.3.51) states, “Although Kali-yuga is an ocean of faults, there is still one good quality about this age. It is that simply by chanting the Hare Krsna mantra one can become free from material bondage and be promoted to the transcendental kingdom.”

To mental health officials, this proposal may sound like religious wishful thinking, if not downright madness. And certainly they should not accept such a proposal without careful investigation. To conduct an investigation, psychotherapists could include in every therapy session fifteen minutes of chanting the Hare Krsna mantra: Hare Krsna, Hare Krsna, Krsna Krsna, Hare Hare/ Hare Rama, Hare Rama, Rama Rama, Hare Hare. We predict that they would be astounded at the results.

Child Abuse:
A Fire Out Of Control

Taking notice of the rising concern over sexual abuse of children, thousands of schools across the country have initiated programs to teach students how to deal with sexually aggressive adults. The programs frequently include skits starring “Uncle Harry,” a character created by the Child Assault Prevention Project (CAP). In one skit Uncle Harry offers Sally, his seven-year-old niece, a Michael Jackson T-shirt if she’ll give him “one of those kisses I like.” Sally refuses—”I think I hear Aunt Mary coming home,” she says—and threatens to tell Mom and Aunt Mary about Uncle Harry’s passes.

Most programs encourage children to report any unusual physical advances by an adult, even if the adult has threatened the child. “An offender will scare a kid,” says a CAP worker, “and tell him his parents won’t love him anymore. So you have to diffuse this strategy ahead of time.”

Millions of children have seen skits and attended classes by CAP and other groups, and these programs seem to be starting to have an effect. In California, where the state government has passed an $11.25-million bill to fund programs for combatting sexual abuse of children, reports of offenses have shot up forty-four percent. And in Maryland’s Montgomery County, which has recently increased the anti-abuse curriculum in its public schools, reports have quadrupled.

On the one hand, these statistics are cause for optimism. Kids are learning to talk, to object, to resist. On the other hand, an increase in the reporting of sexual abuse of children doesn’t exactly mean that abuse is decreasing, that offenders are getting discouraged. Is “Uncle Harry” really going to listen to a seven-year-old’s threats, or worry about being incriminated by a child’s testimony? Not always.

To put an end to sexual abuse of children, we need to look more closely at the nature of sex desire. The Manu-samhita, part of the ancient Vedic literatures of India, compares sex desire to fire. Like fire, sex desire increases when supplied with “fuel.” For example, a man and woman may feel satiated immediately after sexual intercourse; they may feel that their sexual fire has been extinguished. But that feeling is temporary. In time they will try to increase the frequency and intensity of their encounters—to enjoy unlimitedly.

That, of course, is impossible. Since one’s physical capacity for sex is limited, the expansive fire of sexual desires can never be fulfilled. In other words, a primary product of sex enjoyment is dissatisfaction.

In the attempt to alleviate this dissatisfaction, one common tactic is to change partners. If we can’t increase the frequency of sex, then at least we can increase the number of our mates. This tactic has, over the past few decades, resulted in the decay of the institution of marriage. Close to fifty percent of all marriages now end in divorce, with millions of men, women, and children getting severely burned in the process.

Changing partners only adds more fuel to the fire of sex desire, forcing frustrated individuals to seek further alternatives. If more sex with more partners proves dissatisfying, then what next? Well, how about changing the kind of partner? How about bisexuality, homosexuality, bestiality, incest? Get the sexual fire hot enough, and anything goes—even child abuse.

So although a growing number of programs such as CAP evidences a sincere concern among teachers and parents, it also evidences a surprising naivete. Attempting to stop child abuse by getting kids to tell Uncle Harry to cut it out is like trying to stop a forest fire with a garden hose. We need to significantly reduce the size of the fire if we seriously expect to protect our children from getting burned.

Although someone might propose that it is possible to fan the fire of sexual desire without becoming child molesters, that is a risky proposal. Until we learn that sex, like fire, has to be restricted and controlled, we can expect the conflagration of sexual abuse of children to continue blazing. 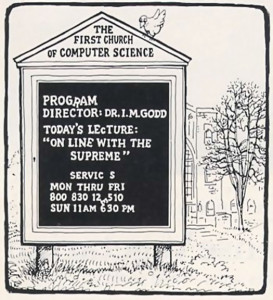 According to an article in a recent issue of Omni, science may soon be able to create an “immortal soul” by using the latest in computer technology.

New forms of intelligence are being encoded by computer scientists. Research is progressing on computer vision, speech recognition, tactile sensing, and other functions that resemble human physiology. But the scientists’ main goal is to duplicate what they claim is the distinguishing quality of the human species, the ability to think. And this achievement, they theorize, will allow them to create an immortal soul, an undying superperson.

Some scientists believe the coming generation will see such tremendous advances in computer science that the microchip and the neuron will become virtually interchangeable. Our brain’s memory banks, they say, will neatly interface with a highly sophisticated computer program and will enter all their stored data, byte by byte, into a computer. The result: storable, copiable electronic clones of our “selves” that we can manipulate like any other software. Thus researchers are hoping to create, or at least to capture, an individual soul.

The philosophical and theological implications of all this are horrendous, as is so often the case when Science and Technology poke their noses into the realm of Spirituality. “In a philosophical sense, immortality would be a technical possibility,” says Hans Moravec, a computer scientist at Pittsburgh’s Carnegie-Mellon University. “The idea of personal death would disappear. We would design our successors. It may sound sacrilegious right now, but so did space travel in the twenties. Eventually these ideas will gain the same sort of acceptability.” Once again a scientist is implying that everything can be explained mechanistically and reduced to numbers. And that science holds all the cards—and all the keys to the secrets of life and death.

All science fiction aside, however, science has not created so much as an ant (what to speak of an eternal ant) and has not been able to prevent death—not by any stretch of the imagination. Ironically, although computer scientists take it as a given that “the ability to think” is the distinguishing quality of the human species, anyone who has closely observed other life forms should see that the distinction is not so much in the ability to think but in what one thinks about. A human being can ponder spiritual questions, but animals are limited to the material sphere; they cannot understand what it means to be an eternal spirit soul.

Neither can some scientists. But the difference between a scientist and an animal is that the scientist is human, and thus he has the potential to understand spiritual matters. If he approaches the right source, that is.

The ancient Vedic scriptures of India give detailed information about the nature of the immortal soul. If the scientists are so concerned about creating an immortal soul, let them approach the guidelines chalked out by the original creator, Lord Krsna.

If they study the Vedas, they will find that the soul is already eternal, that knowledge is sustained, birth after birth. As Lord Krsna explains in the Bhagavad-gita (2.17), “That which pervades the entire body [consciousness] you should know to be indestructible. No one is able to destroy the imperishable soul.” And further, “As the embodied soul continuously passes, in this body, from boyhood to youth to old age, the soul similarly passes into another body at death. A sober person is not bewildered by such a change” (Bg. 2.13).

Thus the Vedic literature gives precise information about the eternal soul. Here are some more examples: “If we divide the tip of a hair into one hundred parts and then take one part and divide this into another one hundred parts, that ten-thousandth part is the dimension of the soul” (Svetasvatara Upanisad 5.9). And in the Mundaka Upanisad (3.1.9): “The soul is atomic in size and can be perceived by perfect intelligence. This atomic soul is floating in the five kinds of air [prana, apana, vyana, samana, and udana], is situated in the area of the heart, and spreads its influence all over the body.”

As long as we think we are the body, remaining unaware of our true, spiritual identity, we are in ignorance. And the results of this ignorance may manifest in many ways, such as in the popular notion that the material body, which is by nature temporary, can be made eternal. Nonsense. Whether you’re a computer or a human being, your body must perish.

Still, our desire for immortality indicates that some essence is eternal within us, something that gives us the idea of infinity. What is that “something”? Well, fiddling with computers won’t help us find it. Studying the Vedic literature will.