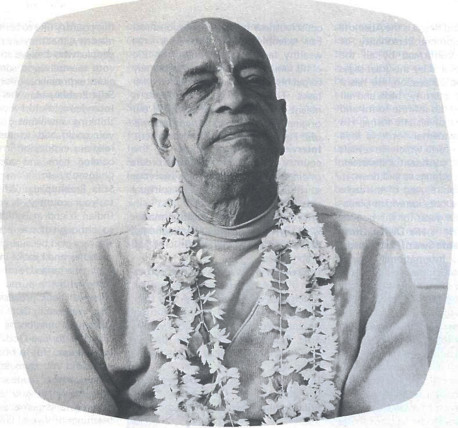 Newton Minnow, former director of the FCC, described the world of TV viewing as a “vast wasteland.” But when a pure devotee of Krsna (God) appears on television, the whole performance becomes surcharged with bliss. When television, with its complex technological set-up for reproducing a picture in thousands of TV sets, is used by a pure devotee for the purpose of glorification of the Supreme Lord, it becomes spiritualized. Whoever sees and hears a pure devotee talking about the nature of God and the eternal soul becomes liberated from all misery.

On July 29, 1971, His Divine Grace A.C. Bhaktivedanta Swami Prabhupada, the author of Bhagavad-gita As It Is, arrived in Gainesville, Florida to speak at a large student gathering at the University of Florida. Taking advantage of his presence in Gainesville, which His Divine Grace described as “a remote corner of the world, thousands of miles from the birthplace of Lord Caitanya” (the incarnation of Krsna who appeared 500 years ago in India to teach the Hare Krsna mantra), the local TV station arranged for this interview.

Lord Caitanya predicted that His philosophy of the Absolute Truth would spread to every town and village in the world. As clearly taught in the Vedic scripture Bhagavad-gita it will reveal to us that our real self is not the body but an individual spiritual soul and that Krsna is the Supreme Spirit, the Soul of all souls. The nature of the spirit soul is eternally fresh. It cannot be destroyed, broken or contaminated. Because he is a pure devotee, Srila Prabhupada can speak from the transcendental platform of Absolute Truth.

We have prepared the text of this interview so that the serious reader may repeatedly read it and study the spirit soul in action. As we have stated, this was not an ordinary television performance. A serious man wants to know the Absolute Truth in order to solve the problems in his life. Thus Bhagavad-gita advises him, “Just approach a spiritual master.” Who will not be eager to listen, for his own benefit, when God reveals Himself through the words of a pure devotee?

Interviewer: Lord Krsna is the Absolute Truth, the Supreme Personality of Godhead. As confirmed by all the Vedic scriptures and by the great sages of the disciplic succession, He has a body made of eternity, bliss and all knowledge. God has infinite forms and expansions, but of all His forms, His original transcendental form is as a cowherd boy, a form which He reveals only to His most confidential devotees. Such are the teachings as laid down in the Vedic literature. And of the sages in the disciplic succession which I mentioned, one is our guest for this conversation today. He is His Divine Grace A.C. Bhaktivedanta Swami Prabhupada, founder of the International Society for Krishna Consciousness. He is the foremost teacher in the West of the philosophy, which, moreover, he teaches not only by word but by example. He came to this country in 1965 on the order of his spiritual master. As a Krsna disciple, he is presently the most prominent human exponent of a line of succession going back 500 years to the appearance in India of Lord Caitanya, and beyond that to a time 5,000 years ago when Lord Krsna was on this planet and His words were recorded. Welcome, sir. What is Krsna consciousness?

Interviewer: Now in this line of succession that we were talking about earlier, which goes way back, all the way back to Krsna Himself—was your spiritual master the previous one before you?

Interviewer: So you are at this particular time, then, the head spiritual master in the world of this movement? Would that be correct?

Srila Prabhupada: I have many other Godbrothers, but I was particularly ordered to do this from the very beginning. I am trying to please my spiritual master, that’s all.

Interviewer: You were sent to this country, to the United States of America. This is your territory-is that correct?

Srila Prabhupada: My territory? What he said was, “You go and speak this philosophy to the English-speaking public.”

Interviewer: To the English-speaking world.

Srila Prabhupada: Yes, especially to the Western world. That is what he told me.

Interviewer: Then you came, sir, to this country about five or six years ago. You came to this part of the world. As such, you did not come to a part of the world where religion was lacking. I n the United States of America we have many religions, and I think people in this country like to believe, in the great majority, that they are religious people, people who believe in God, who devote themselves to some form of religious expression.

Interviewer: And I wonder what your thinking was. What do you think that you could add to the already living religious expression in this country by coming here and adding your own philosophy to it?

Srila Prabhupada: When I first came to your country, I was guest of an Indian friend at Butler, Pennsylvania, so although it was a small county, I was very glad because there were many churches, and I spoke in many of them. My host arranged for that. But I did not come with the purpose to defeat any other religious process. That was not my purpose. Our mission, Lord Caitanya’s mission, is to teach everyone how to love God. That is all.

Srila Prabhupada: This teaching is the most authorized. That is a fact. We are following in the footsteps of Lord Caitanya. He is accepted by us, according to the authority of Vedic religion, to be personally Krsna Himself.

Interviewer: Which Lord is that?

Interviewer: He is the one who came 500 years ago?

Srila Prabhupada: Yes. He is Krsna Himself, and He teaches how to love Krsna. Therefore His process is most authorized. For example, you are the expert in this establishment. If someone is doing something under your guidance and you personally teach him, “Do it like this,” that is very authorized. So when Lord Caitanya taught God consciousness, God Himself was teaching. Similarly, in Bhagavad-gita, Krsna is accepted as God, and He speaks all about Himself. In His final instructions He said, “Just surrender unto Me. I will take charge of you.” But people misunderstood. So Krsna again came, as Lord Caitanya, to teach people how to surrender. We are following in the footsteps of Lord Caitanya, and the method is so sublime that even foreigners, who never knew Krsna, surrender. The method is so potent. So that was my purpose. We don’t say that this religion is better than that religion, or my process is better. We want to see by the result. In Sanskrit there is a saying, phalena pariciyate: a thing is judged by the result.

Interviewer: A thing is—?

Srila Prabhupada: Judged by the result.

Interviewer: Yes, but of course you know your religion is not the only one which teaches this particular precept.

Srila Prabhupada: I have already explained that it is not the only one. There may be many, but this is actually effective.

Srila Prabhupada: Oh, yes. Recently I was in India. I held two meetings daily for ten days, and from twenty to thirty thousand people attended each day. India’s position is that the people there are naturally Krsna conscious, but at the present moment the so-called leaders want to replace this Krsna consciousness with material consciousness.

Interviewer: Is the Krsna consciousness belief or philosophy compatible with the Hindu religion?

Interviewer: Do you claim, then, that your way of loving God is the way to love God?

Srila Prabhupada: Yes, at least for this age.

Interviewer: For this age? You mean for Kali-yuga?

Interviewer: For the times that we live in right now? 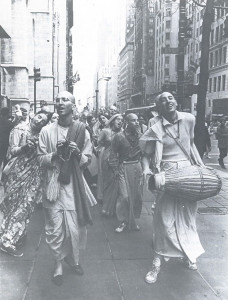 Srila Prabhupada: Because the method is authorized. Krsna prescribes this Krsna Himself and Lord Caitanya They say that this is the only method for self-realization or God realization or learning how to love God. Krsna says this. Therefore, it is authorized, and it is actually happening. Otherwise, these boys and girls are foreigners; they never knew Krsna. Now I have sixty centers, and at each center there is an average of 100 devotees, and they have dedicated their lives. How is it happening unless it is authorized?

Srila Prabhupada: He’d be a very perfect gentleman, that’s all. You could not find any fault in him. That is perfect Krsna consciousness. Therefore, I prohibit my disciples to eat meat. Interviewer: To eat meat?

Interviewer: Or women, I presume.

Srila Prabhupada: All manner of men.

Interviewer: There’s a place for women in the religion, too, I presume.

Srila Prabhupada: I am encouraged.

Srila Prabhupada: Because there are so many devotees coming daily.

Interviewer: Why do you say so many? We have maybe two dozen people sitting here, but of course there are 205 or 210 million Americans.

Interviewer: Do you in general approve of or do you have major complaints about the American society that you now live in?

Interviewer: I would like to thank you very sincerely for giving us a very brief insight into the teachings and the beliefs of the Krsna consciousness movement. May I ask you to ask your followers who are present here with us tonight to join you in the chanting of the mantra for just a minute to close out the program please?