The Special Kindness of Lord Caitanya

Sri Caitanya Mahaprabhu, an incarnation of the Supreme Lord, appeared in India in the fifteenth century. His mission was to freely distribute pure love of God to everyone without considering who was qualified or unqualified. He predicted that the whole world would one day hear the chanting of the Lord’s holy names. The first of the following three narratives is excerpted from Srila Prabhupada’s introduction to Srimad-Bhagavatam. The final two are taken from his English translation of Sri Caitanya-caritamrta, an extensive account of Lord Caitanya’s life and teachings. 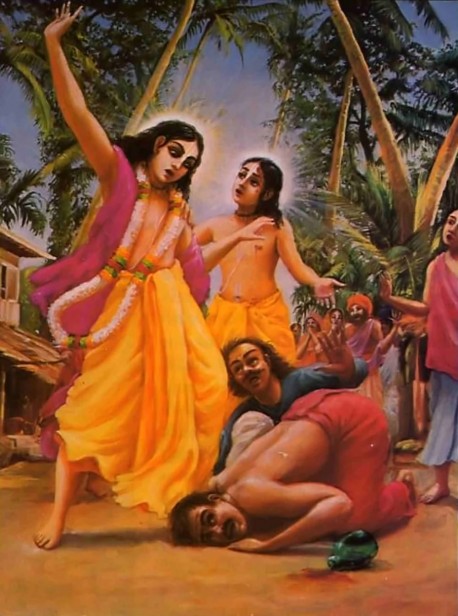 When Lord Caitanya was preaching in the town of Navadvipa, two of His closest associates, Nityananda Prabhu and Haridasa Thakura, approached a noisy crowd on the main road. They learned from passers-by that two brothers, Jagai and Madhai, were once again causing a disturbance in a drunken condition. These two brothers had been born in a respectable brahmana family, but due to bad association they had become debauchees of the worst type. Not only were they drunkards, but they were also meat-eaters, woman hunters and thieves.

Nityananda Prabhu decided that these two fallen souls must be the first to be delivered by Lord Caitanya’s sankirtana movement. If they were delivered from their sinful ways, the good name of Lord Caitanya would be still more glorified. Thinking in this way, Nityananda Prabhu and Haridasa Thakura pushed through the crowd and asked the two brothers to chant the holy name of Lord Hari.

Meanwhile, news of the attack on Nityananda reached Lord Caitanya, who hurried to the spot in a fiery mood. The Lord immediately invoked His Sudarsana cakra (His ultimate weapon, shaped like a wheel) to kill the sinners. But Nityananda Prabhu reminded Him of His mission to deliver the hopelessly fallen souls of the age, of whom Jagai and Madhai were typical examples. Ninety-nine percent of the population of the age resemble these brothers, despite high birth and apparent respectability.

As the Lord raised His Sudarsana cakra and Nityananda Prabhu implored Him to forgive the two brothers, both Jagai and Madhai fell at the lotus feet of Caitanya Mahaprabhu, begging Him to forgive them for their gross behavior. After Nityananda reiterated their plea, the Lord agreed to accept them on one condition: that henceforward they would completely give up all their sinful activities. Both brothers agreed, and the Lord kindly accepted them. He never again referred to their past misdeeds.

This incident illustrates the special kindness of Lord Caitanya. In this age no one can claim to be sinless. Yet Lord Caitanya accepts anyone, no matter how sinful, on the condition that he promise not to indulge in sinful activities after being accepted as a disciple of a bona fide spiritual master. 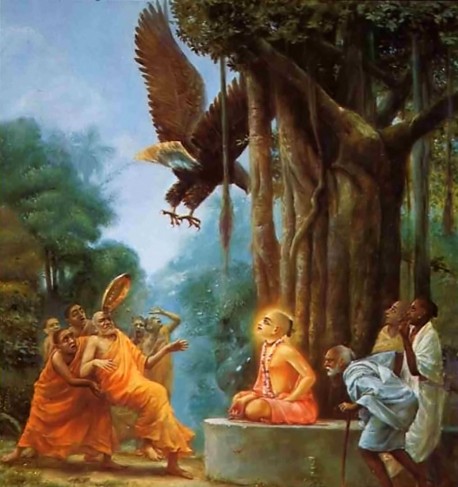 On His extraordinary tour of South India, Lord Caitanya visited many villages, and all the residents became Vaisnavas (devotees of Krishna) by chanting the holy names Hari and Krishna. In this way, many thousands of people were delivered from the miseries of material life.

Sometimes the Lord would establish the supremacy of Krishna consciousness by defeating various opposing philosophies. Once, a very learned Buddhist scholar came before the Lord with his disciples to establish the philosophical conclusions of Buddhism. With great pride, he set forth the nine Buddhist principles, but Sri Caitanya Mahaprabhu broke them to pieces with strong logical arguments.

Many people had gathered to hear the debate, and when they all began to laugh, the Buddhists, who were all atheists, became fearful and ashamed. Atheists may be very expert in mental speculation and argument, but they can be defeated by a Vaisnava firmly situated in his conviction and God consciousness. The Buddhists understood that Lord Caitanya was a powerful Vaisnava, and they returned home very unhappy.

Later they began to plot against the Lord. Their plan was to discredit Him by tricking Him into eating untouchable food. The next day the Buddhists brought a plate of contaminated food to Sri Caitanya Mahaprabhu, calling it maha-prasada (spiritual food offered to Krishna). As the food was being offered to the Lord, a very large bird swooped down, grabbed the plate with its beak and flew up into the air with it. All the food fell on the Buddhists and the plate itself fell down on the head of the chief Buddhist teacher, making a great sound. The teacher’s head was cut by the edge of the plate, and he immediately fell to the ground unconscious.

At this calamity, all the Buddhist disciples cried aloud and ran to the lotus feet of Sri Caitanya Mahaprabhu for shelter. They addressed Him as the Supreme Personality of Godhead, saying, “Sir, please excuse our offense. Please have mercy on us and bring our spiritual master back to life.”

The Lord replied, “Chant the names of Krishna and Hari very loudly near the ear of your spiritual master. Then he will regain consciousness.” 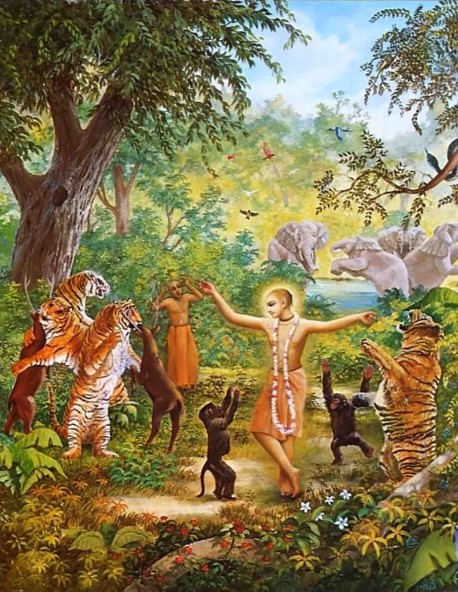 Once Sri Caitanya Mahaprabhu decided to travel to Vrndavana, the place of Lord Krishna’s appearance. A brahmana named Balabhadra Bhattacarya was chosen to assist the Lord, and before sunrise one morning they started their journey.

On the way, they passed through Jharikhanda forest. At this time the Lord was in great ecstasy due to love of Krishna. Packs of tigers, elephants, rhinoceroses and boars approached Him, but the Lord passed right through them unharmed. Balabhadra Bhattacarya was very afraid, but by Sri Caitanya Mahaprabhu’s influence all the animals stood to one side.

Then the Lord splashed water on the bodies of some of the elephants, and they began to chant, “Krishna! Krishna!” and dance. Some of the elephants fell to the ground, and some roared in ecstasy. Seeing this, Balabhadra Bhattacarya was completely astonished.

While passing through the jungle, Sri Caitanya Mahaprabhu chanted very loudly. Hearing His sweet voice, all the does came near Him. A group of tigers then joined the deer and began following the Lord. When He shouted, “Chant Krishna! Krishna!” the tigers and deer began to chant “Krishna!” and dance in ecstasy. Indeed, the tigers and deer embraced each other and kissed! Balabhadra Bhattacarya was struck with wonder at the sight, but Sri Caitanya simply smiled to see all the fun.

In this way the Lord was able to deliver even the animals from the bonds of material existence.

One Response to The Special Kindness of Lord Caitanya