Back to Godhead > ~Featured~ > Krishna Kills the Great Python Aghasura 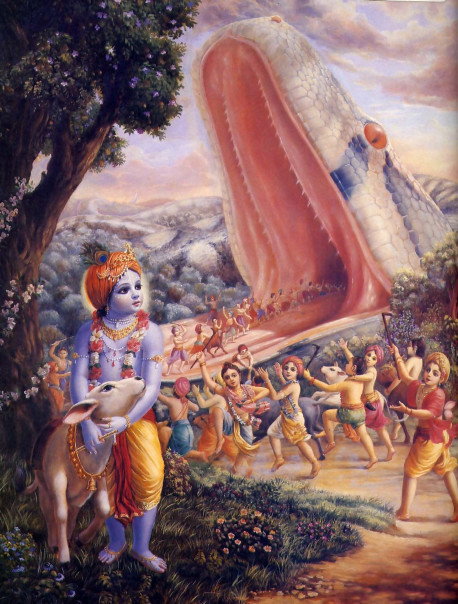 With His friends well on their way into the mouth of the python, Krsna wondered how He could kill him yet save them.

Five thousand years ago Lord Krsna, the Supreme Personality of Godhead, played as a cowherd boy in the north Indian village of Vrndavana. One day Krsna wanted to go to the forest with all His cowherd boyfriends and have a picnic. As soon as He got up from bed, Krsna blew His buffalo horn and called all His friends together. Then, keeping their calves just ahead of them, all the boys started for the forest.

Krsna had thousands of cowherd boyfriends, and each one was taking care of thousands of calves. Krsna’s own calves were innumerable. We may talk of hundreds, thousands, tens of thousands, millions, billions, trillions, and tens of trillions of calves, but Krsna had inconceivably more calves than that. Our tiny brains may not be able to comprehend this, but the Supreme Lord is never limited by our conceptions. Nothing is impossible for Him.

For ornaments all the boys were wearing quartz crystals, small conchshells, pearls, and gold, And when they went into the forest, they also playfully decorated themselves with green leaves, bunches of beautiful flowers, peacock feathers, and colorful minerals such as red clay. Each boy also carried a stick, a flute, a buffalo horn, and a lunch bag.

While the boys were walking through the forest, one of them would steal another’s lunch bag and pass it to a third. And when the boy whose lunch was stolen tried to get it back, the boy who had it would throw it to someone else. All the other boys would laugh, but when the owner became disheartened and started to cry, they would give his lunch bag back to him.

The cowherd boys would play in all sorts of ways. Some played their flutes or blew their buffalo horns, others imitated the buzzing of the bees, and still others imitated the sound of the cuckoos. The boys danced along after the peacocks or imitated the graceful movements of the swans or sat silently with the ducks. They also ran after birds’ shadows along the ground and tried to follow their exact courses. Some of the boys caught monkeys by the tail and played with them, and when the monkeys jumped up into the trees, the boys followed them. If a monkey made a face and showed its teeth, the boys would do the same. A number of boys went to the waterfalls and crossed the river Yamuna. Often they played with the frogs on the bank, and when the frogs jumped in the water, the boys dove in after them. When the boys came out, they would look at their own reflections in the water and stand mimicking and laughing. They would also go to an empty well and make loud sounds. Then when the echo came back, they would call it names and make fun of it…. After stocking up pious activities in many previous lives, the cowherd boys were seeing Krsna face to face and playing with Him as a friend.

Just then the demon Aghasura appeared before Krsna and the cowherd boys. Aghasura happened to be the younger brother of Putana and Bakasura, two demons who had previously tried to harm Krsna. Aghasura thought, “This Krsna has killed my brother and sister—now I shall kill Him and His friends and calves. That way all their mothers and fathers will also die, because these children are their life and soul. When the children die, their parents will die of grief.”

Through his mystic power Aghasura took the form of an eight-mile-long python. At first, the boys thought the demon was just a statue. But then one boy said, “Just see—isn’t this more like a big serpent lying down in the road and widening his mouth to eat all of us?”

Another boy said, “Yes, what you say is true. The mouth of this animal appears to be like a big dark cave; his teeth are like mountain peaks, and his tongue is like a long highway. This hot fiery wind is his breath, and because of all the dead bodies he has eaten, it smells like burning flesh.”

After talking about him this way and that way, the cowherd boys decided to walk right into the demon’s mouth. “How can he swallow us all at once?” they reasoned. “And even if this python did swallow us all, he could not swallow Krsna. Krsna would kill him, just as He killed Bakasura.” All the boys looked at the beautiful lotuslike face of Krsna and began to clap and smile. Now they marched along with their calves toward the gigantic serpent’s open jaws.

Krsna could see that the big snake was actually a great demon, but while He was planning how to save His friends, they entered Aghasura’s mouth and walked right into his cavernous belly. Yet Aghasura didn’t devour them. He was thinking, “Everyone has entered except Krsna, who has killed my brother and sister.”

When Krsna saw that His dearmost friends were out of His hands and were within the belly of Aghasura, He wondered for a moment just what He would do—how He could kill the demon and at the same time save the cowherd boys and calves. Finally, Krsna went into the demon’s mouth.

All the demigods had gathered in the clouds to watch, and they cried, “Alas! Alas!” At the same time, Aghasura’s friends, who were all eaters of flesh and blood, became very happy.

While Aghasura was trying to smash Krsna and His companions, the Lord expanded Himself within the demon’s throat. To counter, Aghasura expanded his own body, but still he found himself choking. His big eyes rolled violently, and he quickly suffocated. His life air could not come out, but finally it burst out of a hole in the upper part of his skull. Aghasura’s spirit soul came out like a dazzling light, illuminating all directions, and it hovered in the sky.

After the demon’s body had dropped dead, Krsna brought all the cowherd boys and calves back to consciousness with His transcendental glance, and then He led them out of the demon’s mouth. At that moment Aghasura’s glittering soul merged into Krsna’s body. Aghasura was certainly very sinful, and generally it is impossible for the sinful to merge into the existence of the Absolute Truth. But in this particular case, because the all-pure Lord Himself had entered Aghasura’s body, the demon became fully cleansed of all sinful contamination. Aghasura received a spiritual body and returned to the spiritual world. Here is proof that the Supreme Lord always does good to everyone. Even when Krsna kills someone, that person is liberated.

On seeing Lord Krsna and the cowherd boys and calves coming out of Aghasura’s mouth, the demigods in the sky felt overwhelmed with joy and at once showered flowers. The celestial dancing girls began to dance, and the Gandharvas, who are famed for their singing, offered songs of prayer. Drummers beat their kettledrums, the brahmana priests recited Vedic hymns, and all Lord Krsna’s devotees chanted, “Jaya! Jaya! All glories to the Supreme Personality of Godhead!”

The gigantic mouth of Aghasura stayed open for some time before gradually drying up. For many days it remained a favorite place where Krsna and His cowherd boyfriends enjoyed their pleasure pastimes.

One Response to Krishna Kills the Great Python Aghasura