Back to Godhead > ISKCON > News > Srila Prabhupada Speaks Out on “Brainwashing”

Srila Prabhupada Speaks Out on “Brainwashing”

Last October a Queens, New York, grand jury leveled charges of extortion and “imprisonment through brainwashing” against New York ISKCON Temple President Adi-Kesava Swami. In mid-February of this year, one month before State Supreme Court Justice John J. Leahy threw the case out of court, Adi-Kesava traveled to ISKCON’s temple in Mayapur, India, to take advice from his spiritual master, His Divine Grace A.C. Bhaktivedanta Swami Prabhupada. The following excerpts from their conversations on the subject of “brainwashing” are reproduced from the journal of Srila Prabhupada’s secretary.

February 17, 1977: Srila Prabhupada said, “The whole world is under a misconception, and we are giving them knowledge. And yet they say we are brainwashing. People in general do not know that the body is valuable only as long as the soul is there. Therefore, their brain is rubbish and must be washed, or human civilization is lost.”

Later Srila Prabhupada gave this argument: “We are not brainwashing, but brain-giving. Where is your brain? You must first have a brain; then we can talk of washing it. You don’t know who you are. Take a dead man and a living man—what is the difference? Because you do not know, you have no brain, and therefore you misunderstand. We can give evidence in court from the Bhagavad-gita to show this. We can prove that you have no brain. You are like the cats and dogs, even if you pose as a philosopher. For centuries this information has been missing: tatha dehantara praptih, ‘The soul is changing, one body after another.’ A person who has a brain will understand this simple logic. The body is changing from childhood to youth. When the important thing, the soul, is missing, it is a dead body. Where is your brain to understand it? Arjuna was chastised for this by Krishna, who said, ‘You have no brain, and you are lamenting about the body.’ They don’t know the real thing, despite their big talk. They say life is a combination of chemicals; but then mix them and let life come. You can’t do it. You are cheating people. You have no brain at all.”

Adi-Kesava Swami [playing the part of an opponent]: “But I have a brain; therefore, I am able to talk with you.” 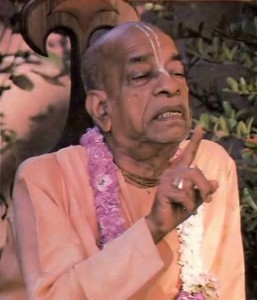 Srila Prabhupada: What is the difference between that talking and the barking of a dog? A dog is alert to someone coming from a distance, even more than a man. Your talking is not proof of a brain.

Adi-Kesava Swami: “But we have art and science.”

Srila Prabhupada: Whatever you have, you cannot answer the ultimate question. Within the body is the real power. Because he is there, the body is changing. The body is like a dress. You should quote the Bhagavad-gita.

Adi-Kesava Swami: Another complaint is that they say we make a person lose his identity by brainwashing him.

Srila Prabhupada: But who are they? They do not know who they are. They are identifying the self with the body. That is brainwashing.

Adi-Kesava Swami: Well, they may say that “all this discussion of the soul is beyond our knowledge.”

Srila Prabhupada: “It is beyond our knowledge” means you can’t understand.

February 19, 1977: This morning Srila Prabhupada called for all the sannyasis [fully renounced preachers of Krishna consciousness]. “Be convinced of this,” he said. “I am saying that everyone in the world has no brain, and we only are brain-giving. Why do I say this? Because I challenge the world’s scientists and great thinkers: ‘You just produce a machine like the body.’ But they cannot. This machine is produced by God. Actually, God Himself does not make this machine. His servant, the material energy, makes the machine: Just see His intelligence. ‘The Supreme Lord is seated in everyone’s heart,’ says the Bhagavad-gita. I am an ordinary man, and yet I can get things done—not directly, but by asking my disciples. So why can’t God do this? The machine of the body is made by His material nature. How is it made? They don’t know. If I challenge them to produce such a machine, they cannot. How this machine is being made by maya, or the material energy, we shall give them the brain to know. We should not be dull and simply accept whatever the scientists say, by noting, ‘Yes, you are right.’ No. At every step we must say, ‘You are wrong. You have no brain.’ “

Adi-Kesava Swami: Well, they say they have actually created a machine which is more complex than a man.

Srila Prabhupada: But that machine is worked by another man. And who made that man? They cannot even understand God’s material nature, what to speak of the Supreme.

Adi-Kesava Swami: When we argue like this, they just change the subject.

Srila Prabhupada: Why do you let them? Capture them.

Adi-Kesava Swami: Well, they will say, “You are talking of religion…

Srila Prabhupada: We are not talking of religion! You don’t know religion. We are talking of machines. An animal has no religion. Later we can talk of that. Now talk of machines. Religion is far away from you. And even if you could manufacture one living machine, these machines are now being created in such numbers that you are trying to stop their creation by abortion. So, so many are already being produced by nature. If you can create one, what will be your credit?

Adi-Kesava Swami: They will say, “We will make a better machine than God has made.”

Srila Prabhupada: Oh. You cannot capture a garter snake, and now you are saying you will catch a cobra.

Adi-Kesava Swami: “Well, you can’t make a brain either.”

Srila Prabhupada: We don’t say that we have a great brain. We are a servant. Our Master will show the brain. But you are a godless rascal. You have the onus of proof on you.