Back to Godhead > Devotees > Tiger Consciousness — Srila Prabhupada Speaks Out

We Cannot Remain in Tiger Consciousness 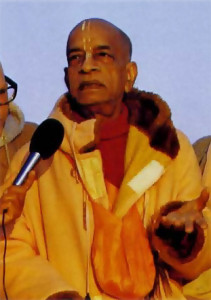 This exchange between His Divine Grace A.C. Bhaktivedanta Swami Prabhupada and guests took place in December, 1968, at the Los Angeles Krsna center.

Guest: If man wasn’t meant to eat meat, why in nature do the other animals kill meat?

Srila Prabhupada: Are you “another animal”?

Srila Prabhupada: No, not all. You may be, but we are not. Do you like to be classified with the animals?

Guest: I don’t feel that I am better than the animals. I have respect for all God’s creatures.

Srila Prabhupada: You have respect for all, and you kill animals?

Guest: Well, why is it—if man is not meant to eat meat—that in nature the animals eat each other?

Srila Prabhupada: For instance, a tiger will never come to claim the grain—”Oh, you’ve got so much grain—give me some.” No. Even if there are hundreds of bags of grain, he doesn’t care. But he’ll pounce upon an animal. That is his natural instinct. But why do you take grain, fruit, milk, meat, and whatever you get? What is this? You are neither animal nor human being. You are misusing your humanity! You should think, “What is eatable for me?” A tiger may eat meat-he is a tiger. But I am not a tiger; I am a human. If I’ve got enough grain, fruit, vegetables, and other things God has given, why should I go to kill a poor animal? This is humanity.

You are animal plus human. If you forget your humanity, then you are an animal. [A brief silence.] So we are not simply animals. We are animal plus human. If we increase our quality of humanity, then our life is perfect. But if we remain in animality, then our life is imperfect. So we have to increase our human consciousness—that is Krsna consciousness. If you can live very peacefully, very nicely, in good health by eating so many varieties of foodstuffs given by Krsna, why should you kill an animal?

Besides that, scientifically, your teeth are meant for eating vegetables. The tiger has teeth for eating meat. Nature has made it like that. He has to kill another animal; therefore he has nails, he has teeth, he has strength. But you have no such strength. You cannot kill a cow like that—pouncing like a tiger. You have to make a slaughterhouse and sit down at your home…. If somebody else slaughters the cow, you can eat very nicely…. What is this? Do like the tiger! Pounce upon a cow and eat! … You cannot do that.

Guest: So you don’t believe in nature’s law. I believe nature’s law applies equally to everybody.

Another Guest: Have we fallen from higher to lower, or have we come up from plants and animals?

Srila Prabhupada: Yes, naturally you have fallen from higher to lower—from the spiritual world to this material world, and then down to the lower species. Then you make progress, and you again come to this human form. If you utilize your higher consciousness, then you go still higher: you go to God. But if you don’t use your higher consciousness, you again go down. So don’t be misguided. Take to God consciousness, Krsna consciousness, and that will be proper use of this human form of life. Otherwise, if we indulge in meat-eating, like a tiger, we may get the body of tiger in our next life, but what is the use? Suppose I become a very strong tiger my next life. Is that a very good promotion? Do you know the life of a tiger They cannot even eat daily. They pounce upon one animal and keep it secretly, and for a month they eat the decomposed flesh—because they don’t always get the chance to kill an animal. God will not give that chance. It is natural: in the jungle wherever there is a tiger the other animals flee. Self-defense. So on rare occasions, when the tiger is too hungry, then God gives him a chance to pounce upon another animal. A tiger cannot get so many palatable dishes daily. It is in the human form of life that we have all these facilities. But if we misuse them, then . . . go to the tiger life. Be very strong, with full pouncing capacity.