Back to Godhead > Devotees > Chanting > Kirtan at the Hindu Centre, London

Kirtan at the Hindu Centre, London 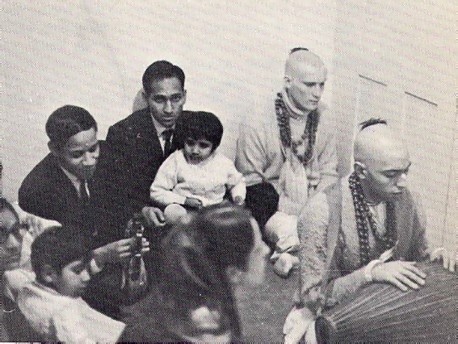 Kirtan at the Hindu Centre, London.

“Transformed hippes clad in saffron robes…chanting the
Hare Krishna Mantra”—so ran a recent story in the London Evening Standard.
At the end of August three householders, their wives and
a baby named Saraswati left New York for London
to open the first Krishna Consciousness center
in Britain. Almost simultaneously, a center was opened
on the Continent, in Berlin.
Londoners, living in the capital of what was once the world’s
mightiest and most far-flung empire, have long been
exposed to an endless variety of self-styled yogis,
swamis, sufis, and mystic teachers, all professing to
impart the gems of Oriental wisdom.
Inevitably, however, their gems have proved to be
nothing but colored glass. The emergence of Krishna Consciousness in London this year is somewhat
different. Although this movement first began in
India, the majority of His Divine Grace A. C.
Bhaktivedanta Swami’s students are Americans. And,
what’s more, the teaching of Krishna
Consciousness does not recognize nationality as a valid index to one’s identity. Because it
sees all beings as the children of God, this teaching
will be familiar to westerners in its closeness
to Christian philosophy, but because of the scientific
presentation of spiritual knowledge characteristic of the
Vedic literature, Krishna Consciousness
also offers somthing new to people of the West.
The initial response and enthusiasm in London has been
entirely encouraging. Kirtan—chanting
to the transcendental sound vibration of HARE KRISHNA—
is now being held regulary at 7 p.m. Wednesdays
and Fridays at The Arts Lab, 182 Drury
Lane. Hundreds joined in for a recent Kirtan performed
at the Middle Earth Roundhouse, with devotee
billed as the “Radha Krishna Temple,” he Fugs and
other groups being on the same program.
Chanting was conducted until dawn.