Back to Godhead > ~Featured~ > Chance: There is No Such Thing

Chance: There is No Such Thing 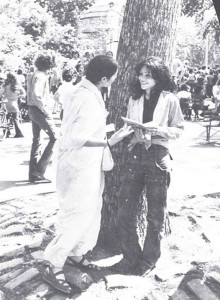 A fully Krsna conscious person never sees anything as accident or chance because he sees Krsna’s hand in all things. Actually, there is no such thing as chance; when we say that an event happens by chance or by accident, this simply means that we are unfamiliar with the reasons why it happens. There is a cause behind everything. When an apple falls from a tree, it is not by chance that it falls down to the ground rather than up to the sky; there is a natural law which is acting. Similarly, there are laws of nature—both simple and complex which rule all the events of this world.

Lord Sri Krsna, as the Supreme Lord, the father of all living entities, feels natural affection for all His sons, and He feels very sorry if one of His sons separates himself from his eternal family to come to the material world. As a father is always anxious to find a lost son, so Krsna is always anxious to reclaim the illusioned living beings who have forgotten Him and are lost in the complexities of the material world. He therefore tries in different ways to get them back. Sometimes He comes to this world Himself, or sometimes He sends His son or servant, always with the same mission—to ask us to turn our faces toward Him and to kindly rejoin Him in the spiritual world.

The Krsna consciousness movement is Krsna Himself, asking us to come back to Him. The devotees are His servants, the books are His words, and the chanting of Hare Krsna is the sound of His holy name. The Krsna conscious movement is an opportunity for everyone—regardless of temporary designations of race, religion or nationality—to revive his eternal spiritual nature as a servant of the Supreme Lord. It is a supreme call to all living entities to come back home, back to Godhead.

In this age of quarrel and hypocrisy, Krsna gives us a way to come back to Him which is very simple and beautiful and which can be adopted by anyone in any part of the world. It is simply to chant His holy name, dance in ecstasy, taste food which has first been offered to Him in love, and relish discussions about His name, fame, qualities and pastimes. This is a universal method authorized in revealed scriptures for this age, and therefore anyone, without having any previous qualifications, can participate in the Krsna consciousness movement and thus attain the perfection of life.