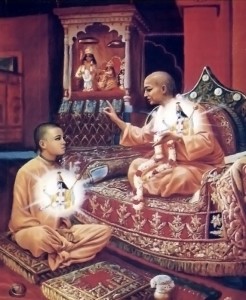 by His Holiness Subala dasa Svami

His Holiness Subala dasa Svami, a frequent contributor to Back to Godhead, is the founder of ISKCON’s Philadelphia center. Having recently returned from a long stay in Vrndavana, India, he is now on a speaking tour of colleges in the northeastern United States and Canada.

“THE SUPREME OCCUPATION [dharma] for all humanity is that by which men can attain to loving devotional service unto the transcendental Lord. Such devotional service must be unmotivated and uninterrupted to completely satisfy the self.” (Bhag. 1.2.6)

This verse of Srimad-Bhagavatam clearly defines the proper path of spiritual advancement in life as well as the desired goal to be attained. Srimad-Bhagavatam, Srimad-Bhagavad-gita and other allied scriptures of the Gaudiya-Vaisnava-sampradaya (the disciplic succession of Krishna consciousness) give proper directions in spiritual knowledge to deliver suffering humanity from the darkness of ignorance. Such directions are free from all the mundane concepts of religion that are prominent throughout the world. This transcendental religion, authorized by the Supreme Lord Himself, is meant to uplift those who are actually intelligent and ready to take up the direct process of loving devotional service unto Lord Sri Krishna under the guidance of the Lord’s representative, a bona fide spiritual master.

From the very beginning Srimad-Bhagavatam immediately rejects all cheating processes of so-called religious action and puts forward in the clearest terms the true religion of all living entities:

“Completely rejecting all religious activities that are materially motivated, this Bhagavata Purana propounds the highest truth, which is understandable by those devotees who are pure in heart. The highest truth is reality distinguished from illusion for the welfare of all. Such truth uproots the threefold miseries. This beautiful Bhagavatam, compiled by the great sage Sri Vyasadeva, is sufficient in itself for God realization. As soon as one attentively and submissively hears the message of Bhagavatam, he becomes attached to the Supreme Lord.” (Bhag. 1.1.2)

What generally passes under the name of religion is not a spiritual culture but a material progression of dharma (religiosity), artha (economic development), kama (sense gratification) and moksa (liberation). People engage in pious activities so they may advance in economic development. By economic development they are able to satisfy the senses, but when they fail to become happy by sense gratification, they seek liberation. This progression is based not on the satisfaction of God but on the satisfaction of the individual, who wants to make God his order supplier and offer a few prayers as payment. Such a concept of religion is not based on love; it is a sort of business arrangement. We often find that if the Lord fails to satisfy the demands of such worshipers, they decry the very existence of God and become agnostics or atheists.

This is a cheating process because the living entities are meant for the service and satisfaction of God, not vice versa. One should never try to make God his order supplier, but should always be ready to carry out the orders of the Lord faithfully, like Sn Arjuna, the hero of Bhagavad-gita. Therefore Srimad-Bhagavatam begins from the point of pure devotional service, the true religion, which is where Bhagavad-gita leaves off:

“Abandon all varieties of religion and just surrender unto Me. I shall deliver you from all sinful reaction. Do not fear.” (Bg. 18.66)

Upon hearing this statement of Lord Sn Krishna, we may wonder how it is that Krishna, who earlier said in Bhagavad-gita (4.8), dharma-samsthapanarthaya sambhavami yuge yuge (“To reestablish the principles of religion, I advent Myself millennium after millennium”), is now telling us to give up all varieties of religion. Therefore we must know the difference between real religion and apparent religion.

Since God is one, religion must also be one. There is one common religion of all living entities, and that is Krishna consciousness, or sanatana-dharma. This Krishna consciousness is not a sectarian concept that artificially tries to decry other religions and establish its supremacy on the basis of mundane superiority and inferiority concepts; it is the natural urge of the spirit soul for engaging in the loving service of God.

We are not Christians, Jews, Hindus or Moslems, for these are all bodily designations. Because I have taken my birth in a Christian family I think I am a Christian, but I do not know that in my next life I may be a Buddhist or something else. A Christian may convert to become a Jew, or a Hindu may become a Moslem. These are all temporary designations having to do with the body. Therefore, they are not the one true eternal religion of all.

Then what is that true religion that is common to everyone? It is service to God. Whether one is Christian or Jew, Hindu or Moslem-or even dog, cat or demigod-everyone is an eternal servant of God. When Sanatana Gosvami” asked Sri Caitanya Mahaprabhu about the svarupa, or constitutional position, of every living being, the Lord replied that the svarupa of the living being is the rendering of service to the Supreme Personality of Godhead (jivera ‘svarupa’ haya krsnera ‘nityadasa’).

In the conditioned state of material existence the living entities serve the Lord indirectly and unfavorably, whereas in the unconditioned state of spiritual existence the living entities serve the Lord directly and favorably. To give an example, everyone in the State serves the State. Some serve favorably as policemen, soldiers, politicians, taxpayers, etc., while others serve unfavorably as prisoners. Trapped within the prison house of material nature under the supervision of Durgadevi (the material energy), the conditioned souls are forced to serve maya, or illusion, and in return for their service they are kicked by the cruel laws of nature. But the liberated souls living in the supreme abode of the Lord serve the Lord directly in one of five transcendental rasas, or mellow relationships, and they enjoy a life of eternity, knowledge and bliss in the association of the Supreme Personality of Godhead, the reservoir of all pleasure.

Submissive hearing of Srimad-Bhagavatam or Bhagavad-gita from the lips of a pure devotee is the proper means of understanding this great science. In the Tenth Canto of Srimad-Bhagavatam, Fourteenth Chapter, in his prayer of regret before Sri Krishna, the Supreme Personality of Godhead, Lord Brahma said, “O my Lord! Those devotees who completely give up the attempt to become one with You by the culture of empiric knowledge but simply try to hear about Your glories from the mouths of self-realized saints and live a virtuous life can easily achieve Your favor, although You are unconquerable by anyone within the three worlds.” Lord Caitanya approved this direct culturing of devotional service in His discourses with Ramananda Raya. The Lord rejected many other processes of spiritual realization, but He completely approved the process of pure devotional service executed under the guidance of a bona fide spiritual master.

In Bhagavad-gita also, the Lord recommends:

“Just try to learn the truth by approaching a spiritual master. Inquire from him submissively and render service unto him. The self-realized soul can impart knowledge unto you because he has seen the truth.” (Bg. 4.34)

In the conditioned state of ignorance we cannot approach Krishna directly, but He is so kind that He manifests Himself before us in the form of the spiritual master, who in turn instructs us regarding the devotional service of Krishna. As stated in Srimad-Bhagavatam:

“O my Lord! No one, not even a devotee who has lived as long as an age of Brahma, can sufficiently acknowledge his obligation unto You, for You manifest Yourself in two features-namely, externally as the acarya (spiritual master) and internally as the Supersoul-to deliver the embodied living being by giving him directions as to how he can go unto You.” [Bhag. 11.29.6)

“The immediate result of applying devotional service unto the Personality of Godhead, Sn Krishna, is that causeless knowledge and detachment follow.” [Bhag. 1.2.7) Bhakti-yoga is the topmost of all transcendental activities. By its practice one achieves all the good results of other yoga processes automatically, without having to endeavor for them separately. And the highest goal, Krishna-prema, or pure love of God, is attained exclusively by means of bhakti-yoga. Bhakti-yoga is open to everyone, and its practice can elevate one to the highest stage of God realization.

The principles of knowledge and detachment are two important factors on the path of transcendental realization. By attaining perfect knowledge of everything material and spiritual one can become detached from material life and become attached to the transcendental loving service of Krishna.

“After many births and deaths, he who is actually in knowledge surrenders unto Me [Krishna] , knowing Me to be the cause of all causes and all that is. Such a great soul is very rare.” (Bg. 7.19)

Unless one gets a taste of higher enjoyment, how can he give up the enjoyment of material pleasures? Some philosophers artificially renounce the world as false and accept the impersonal Brahman as the only reality [brahma satyam, jagan-mithya), But, because they fail to achieve a higher taste of transcendental activities, they cannot give up their material affection, and they again fall down to the mundane plane of humanitarianism, philanthropy, altruism, politics, etc.

On the other hand, by engaging in the supermost human occupation, devotional service, a pure devotee certainly retires from all inferior occupations of material life and attains a higher taste so that he does not have to come down again. In the Hari-bhakti-sudhodaya it is stated that Prahlada Maharaja, a great devotee of the Lord, prayed to Nrsimha-deva (the half-lion, half-man incarnation of the Lord) as follows: “My dear Lord, I repeatedly pray unto Your lotus feet that I may simply be stronger in devotional service. I simply pray that my Krishna consciousness may be more strong and steady because happiness derived out of Krishna consciousness and devotional service is so powerful that with it one can have all other perfections of religiousness, economic development, sense gratification and even the attainment of liberation from material existence.”

Whatever the pure devotee does he does by the grace of the Almighty. Therefore he progresses smoothly and overcomes all impediments on the path. The conclusion is that one who is a pure devotee has all good qualities—knowledge, detachment, etc.—but one who has only knowledge or detachment may not be well acquainted with the principles of bhakti, which is the supreme occupation for a human being.

The present Krishna consciousness movement inaugurated by Lord Caitanya Mahaprabhu is the true religion of all living entities, and it is being presented for the well-being of the entire world by our spiritual master, His Divine Grace A.C. Bhaktivedanta Swami Prabhupada. He recommends the following simple formula. Let there be:

One scripture- Bhagavad-gita As It Is

One work-Loving service to the Lord.

And the net result will be-One World of peace and prosperity.