A brief look at the worldwide activities of the International Society for Krishna Consciousness. 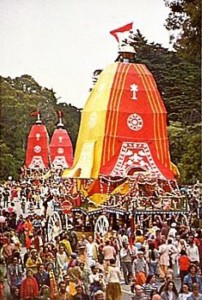 In a proclamation issued June 23, 1975, Mayor Joseph L. Alioto established July 20 as “Ratha-Yatra Day” in San Francisco. Ratha-Yatra is a large festival sponsored in San Francisco and many other cities and countries by the International Society for Krishna Consciousness. The proclamation from the mayor’s office noted that “this event, held in India annually during the month of July, is known to be one of the oldest in the history of man.” The Bay Area event has been observed for the past nine years and is modeled after the original celebration still held annually in the city of Jagannatha Puri, India.

Previewing the attractions, the mayor described “a two-day celebration in Golden Gate Park, highlighted by a parade with forty-five-foot-high Jagannatha carts and a free vegetarian feast.” Jagannatha, like Krishna, is a name for God. The parade honors a pleasure ride He took thousands of years ago during His pastimes on earth. The entire festival is energized by continuous chanting of Hare Krishna, Hare Krishna, Krishna Krishna, Hare Hare/ Hare Rama, Hare Rama, Rama Rama, Hare Hare.

The Ratha-Yatra festivals in San Francisco, Chicago, Philadelphia, London and Melbourne—among other cities—were a big hit with the thousands who attended. In each festival, spectacular chariots forty or fifty feet high rolled along the parade route, pulled by devotees of Krishna and recruits from the crowd, who delighted in the work. The Germantown Courier described the cart in the Philadelphia parade: “Its towering canopy of red and yellow fabric, ornamented with silver swans, swayed gently. Diamond-shaped mirrors on the spokes of its seven-foot wheels splintered the light. A fringe of silk pennants fluttered from its upper deck, where little children leaned over to fling handfuls of flowers to the crowd.”

Speaking to the huge gathering outside Philadelphia’s Art Museum after the parade, His Divine Grace A.C. Bhaktivedanta Swami Prabhupada described how the soul evolves through millions of species of life. Human life, he explained, should be used for spiritual awakening His Divine Grace also took part in the San Francisco festival one week later. At Lindley Meadow in Golden Gate Park, he carefully explained the meaning of the words of the Hare Krishna chant and requested those present to “cooperate with God.” The theme of cooperation played a part in an introductory speech by California State Senator Milton Marks, and Srila Prabhupada expanded on it.

In each city, Ratha-Yatra’s finale was a massive feast of vegetarian food which had been offered to Lord Krishna. The largest crowd was in San Francisco, where festival organizers brought over five tons of food for the banquet. That was enough to satisfy even late-comers like a young priest who said, “I’ve got five hundred kids with me. Can you feed them all?” The answer was yes—and they all had seconds.

“Devotees of the Krishna Consciousness Society can dance and chant on the highways and byways without interference by Philadelphia police. And they can preach from religious literature and distribute sanctified food and flowers to people in public areas, transportation terminals, and Philadelphia International Airport.” 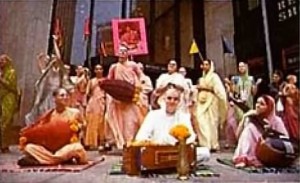 The ruling settled a two-month conflict between devotees and local municipal officials. Arrests of many ISKCON members for alleged violations of city ordinances had provoked the normally peaceful devotees to bring a lawsuit against the City of Philadelphia. They also sought an injunction to stop police from harassing them in violation of their First Amendment right to practice their public activities, called sankirtana.

As a result, the police are now restrained from making arrests on the basis of “unconventional appearance, manner, life-style or religious activities,” the decree stated. The judge also ordered all pending litigation discontinued and said that all arrest records must be destroyed.

The Bulletin noted that “the decree recognizes the Krishna Society as an authentic religion.” Similar decisions reached in dozens of cities in the United States and other countries indicate a growing appreciation of the authenticity of the Krishna consciousness movement.