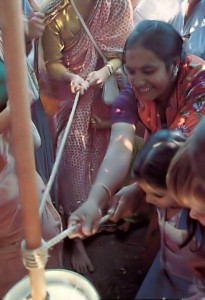 On August 18, thousands of Los Angeles residents saw Lord Krishna’s birthday celebration, both in person (at ISKCON’s Los Angeles center) and on television. Three stations and the Los Angeles Times covered this commemoration of Krishna’s appearance on earth.

The event climaxed with a special gift to Lord Krishna: a half-ton cake shaped like an ancient Indian palace, complete with domes and balconies, colored lights, nectar-showering fountains, and gingerbread elephants. (The edible edifice took five days to make and ten days to eat.) Aside from the cake, the devotees offered the Lord 745 dishes; so there was plenty for everyone.

Inside and outside the temple, transcendental bands played and sang the Lord’s glories. Also, the festival featured a butter-churning contest (right) and exhibits of transcendental sculpture, paintings, and books. Similar celebrations took place at other ISKCON centers worldwide.

For the first time ever, the nearly one billion residents of China can read an authorized translation of the Bhagavad-gita. Srila Prabhupada commented that the publication, on June 1, of the first six chapters of the Chinese Bhagavad-gita As It Is (translation from the English by Yasomati-suta dasa) was “a great triumph in the effort to spread Krishna consciousness all over the world.” Distribution of the new book in Hong Kong and Taiwan has begun.

ISKCON devotees have opened a new center in Candigarh, the capital city of the northwest Indian states of Punjab and Harayana, at the base of the Himalayan mountains. At present, the fledgling center boasts only five members (including president Caityaguru dasa), all from India, England, and America. Despite this shortage of manpower, the residents have responded to Krishna consciousness enthusiastically. Both the Governor of Punjab and the Chief Minister of Harayana have declared publicly that they will assist the Krishna conscious movement in every way possible.

Recently, Jagatguru Svami and several other devotees journeyed through the African states of Kenya, Ethiopia, Somaliland, French Afar, and Sudan to chant Hare Krishna and give classes on the Bhagavad-gita As It Is. The people of northern Sudan found Krishna consciousness particularly attractive, and the devotees plan to return to that area soon.

Dr. Elwin H. Powell, Professor of Sociology at the State University of New York (Buffalo), recently made this evaluation of Bhagavad-gita As It Is: “While I would not presume to assess the metaphysical validity of Bhagavad-gita As It Is, by His Divine Grace A.C. Bhaktivedanta Swami Prabhupada, I would urge my fellow sociologists to examine the work as a possible key to understanding what Sorokin called ‘ideational cultures.’ This transcendental mysticism from the East is now taking root in the ‘counter-cultures’ of the West and providing, for many, a way out of the anomie—the wilderness—of a disintegrating civilization.”

And Dr. C. L. Spreadbury, Professor of Sociology at Stephen F. Austin University, remarked, “The Srimad-Bhagavatam and Sri Isopanisad provide insight into the culture of India in a way which ordinary textbooks cannot do for sociologists. These books provide insight into sociology of religion, stratification, and control without ever needing to use those particular words. The books are not only beautiful, but also relevant to our times as we as a nation search for new cultural patterns for our way of life.”