Literature Distribution More Than Doubles In One Year 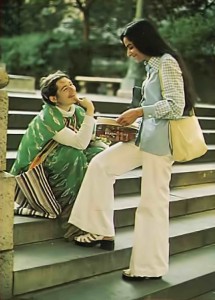 The members of the International Society for Krishna Consciousness made 1974 an outstanding year for the distribution of transcendental literature. Following the request of their spiritual master, His Divine Grace A.C. Bhaktivedanta Swami Prabhupada, to “distribute my books profusely,” in 1974 the devotees distributed more than 6-1/2 million pieces of literature—from small pamphlets to 1,000-page BHAGAVAD-GITAS. More people than ever before—some 400,000 of them—took large, 400-page Krishna conscious books. In only one year’s time the annual distribution of BACK TO GODHEAD magazine (described by Srila Prabhupada as “the backbone of the Krishna consciousness movement”) almost doubled to four million copies. And in 1975—in February alone—circulation climbed to 900,000 copies. Has the distribution of Krishna conscious books reached its peak? “This is only the beginning,” said Ramesvara dasa, the devotee in charge of the Society’s central book warehouse in Los Angeles. “Krishna is unlimited. There’s no end in sight.” 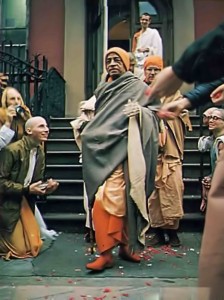 His Divine Grace A.C. Bhaktivedanta Swami Prabhupada has just completed a tour of ISKCON temples in the Western Hemisphere. After first visiting Hawaii, he then went on to Los Angeles, Mexico City, Caracas, Miami, Atlanta, Dallas, and New York. Srila Prabhupada is now in Mayapura, India, where he is celebrating the appearance day of Lord Caitanya Mahaprabhu with many of his disciples from around the world. He plans to open the Vrndavana (India) Krishna-Balarama Temple in late April and, tentatively, to then visit the newly opened center on Mauritius, an African coastal island whose Prime Minister is a life member of ISKCON.