Back to Godhead > Devotees > Guru / Initiation > Initiation into Krishna Consciousness

A devotee helps to place Balarama, one of three Jaganath deities in position above the altar in ISKCON’s New York temple. 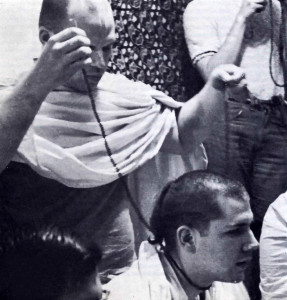 Brahmananda, President of the New York temple, twines initiation beads around the neck of his new God brother-to-be.

In the “Bhakti Rasamrita Sindu” (The Waves of the Nectar of Devotion), by the great saint Srila Rupa Goswami, there are listed 64 forms of “Upasana”—service and worship of the Lord. Of these 64, the following three are considered to be of the essence of spiritual life:

1. Submission to the Spiritual Master, or Guru,
2. Receiving initiation and training from him, and
3. Affectionately serving him.

In the study of God realization known as Krishna Consciousness, the most important celebration for a devotee to take part in is his own acceptance of initiation from the Spiritual Master. Initiation is the formalized ritual of entering into a new stage of existence. Even in our modern-day secular society the fundamental events of changing status—birth, marriage, and death—are celebrated by ritual which recognizes, at least formally, man’s link with the Supreme. Spiritual initiation, however, is not the same as our wedding or funeral ceremonies, which clearly indicate events related to the body. Surrendering at the feet of the Spiritual Master is a spiritual event. As His Divine Grace A.C. Bhaktivedanta Swami, Spiritual Master of the Hare Krishna Movement, once explained to a disciple: “We [Guru and students] are all eternal associates.” 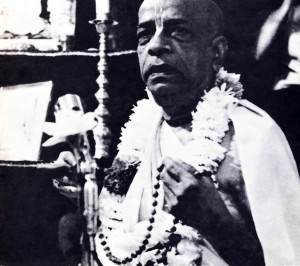 He added, further, that the Spiritual Master continues to teach in the material world until all his disciples have been delivered into the spiritual sky. For this reason, the Spiritual Master is cautioned by most authorities not to accept too many disciples. And, for the sake of the beloved Spiritual Master, it is incumbent upon the initiated disciple to remain fixed in transcendent Krishna Consciousness through performance of devotional service. In this way, a reciprocal relationship of spiritual love is established.

The initiation ceremony includes the following rites: First, water sacraments and sanctification of the initiate’s japa (chanting) beads by the Spiritual Master. There are 108 beads, usually hand carved from the sacred Tulasi plant. They stand for the 108 Gopis, the Spiritual Maidens with whom Lord Krishna displayed His transcendental pastimes. After sanctification, the beads are returned and the initiate is informed of his spiritual name. Unlike material names, which refer to the body only, spiritual names refer to the true self, and are eternal. In general, they are names of Krishna, His Associates, or great saints. They are all appended with “Das” or “Devi Dasi” (the servant of), the former for boys and the latter for girls.

The Spiritual Master returns the sanctifies beads to the new disciple: “Your name is Vamanadev”

The initiate also receives a string of Tulasi neck beads, which is one of the marks of a Vaishnava, a devotee of the Lord, and which acts as protection against Yamaraj, the demigod of Death. These neck beads are never removed.

In addition to the usual deity offerings of sweet scents, flowers, incense, candles and eatables, an impressive fire sacrifice is kindled at such ceremonies, upon which ghee (clarified butter), grains (barley and sesame) and whole bananas are sacrificed. Each initiate, as well as others taking part in the ceremony, throws handfuls of grain into the fire at the prescribed times. In the Vedic age, when wealth was measured in the number of cows and grains, tons of butter and grain were sacrificed to Lord Vishnu, and this was the recommended process for God realization. In Kali Yuga, the present age of quarrel and discord, when the earth is poor and men are not engaged in agrarian occupations, the recommended process is “Sankirtan,” the chanting of the Holy Names of the Lord. 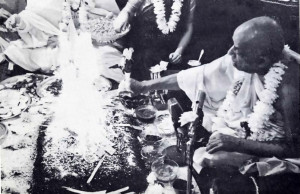 The fire sacrifice marks the climax of the initiation ceremony, and is followed by joyous singing and ecstatic dancing before the deities. Upon conclusion, Prasadam—food prepared and offered to the deities—is distributed, and feasting begins.

In addition to the initiation ceremonies depicted above, there are many other celebrations within the scope of Krishna Consciousness, the more frequent and elaborate being marriages and installations of the deities in their temples. Both of these also utilize the fire sacrifice. 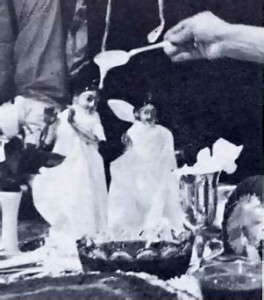 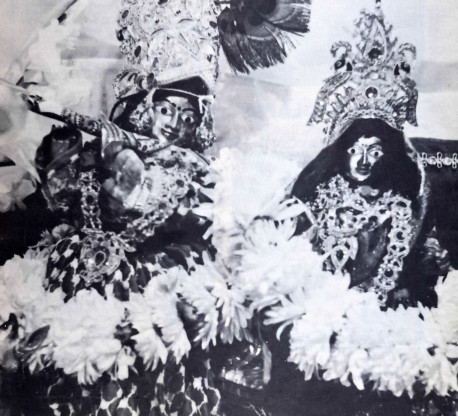 The garlanded Radha and Krishna, installed in the New York temple.

Deity worship, one of the most important aspects of devotional service, is probably the least understood by nondevotees and neophytes alike. Composed of apparently material elements, the deity may look like an idol to one with limited knowledge, but it is actually a Form of the Lord incarnate, called “Archa-Vigraha.” The philosophy of Lord Chaitanya Mahaprabhu teaches that God is simultaneously one and different from His creation. Krishna is in every atom, and He can assume various transcendental forms for our benefit, to make it easier for us to worship Him. In no way is the Lord ever subject to, or contaminated by, the laws of material Nature.