Back to Godhead > Prabhupada > His Divine Grace A. C. Bhaktivedanta Swami Prabhupada 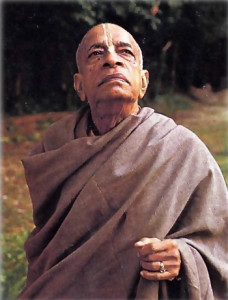 His Divine Grace A. C. Bhaktivedanta Swami Prabhupada was known to the world as the founder-acarya of the International Society for Krishna Consciousness (acarya means “one who teaches by his very life”), as the spiritual master who singehandedly made “Hare Krsna” a household word, and as the foremost author and scholar in the realm of ancient India’s Vedic philosophy, religion, and culture.

Srila Prabhupada appeared in this world in 1896, in Calcutta, India. In 1922 he met his spiritual master, Srila Bhaktisiddhanta Sarasvati Gosvami, who asked him to teach the science of Krsna conscousness in the English-speaking world. To that end, in 1944 Srila Prabhupada started BACK TO GODHEAD magazine, and in the early 1960’s he wrote and published three volumes of translation and commentary on Srimad-Bhagavatam, “the cream of the Vedic literatures.”

In 1965 Srila Prabhupada sailed to America on the steamship Jaladuta, with only seven dollars’ worth of rupees, a pair of hand cymbals, and a few copies of the Bhagavatam. He was also the author of Bhagavad-gita As It Is and some forty other large books. The scholarly community regards these publications as definitive and has made them standard textbooks and reference works.

Traveling almost constantly, Srila Prabhupada guided his international society from humble beginnings on New York’s Second Avenue to a worldwide confederation of more than one hundred asramas, schools, temples, institutes, and farm communities. He passed away in Vrndavana, India (the place most sacred to Lord Krsna), on November 14, 1977. Now that Srila Prabhupada has departed, his disciples will carry on the movement he began.

One Response to His Divine Grace A. C. Bhaktivedanta Swami Prabhupada