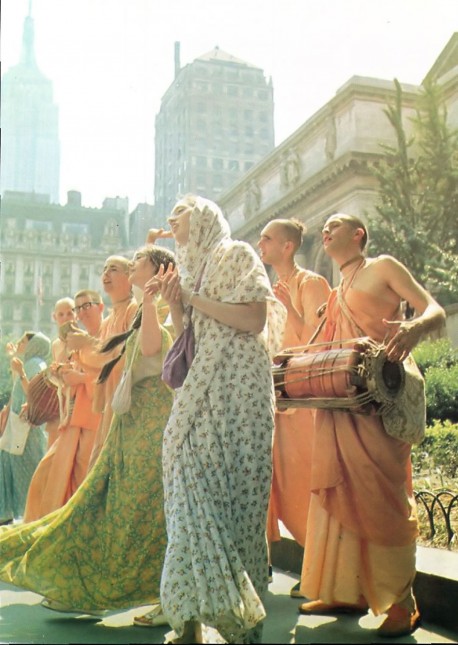 THE VEDIC SCRIPTURES recommend the chanting of Hare Krishna as the best means to realize love of God in the present age. It is said that long ago humans lived for many thousands of years, and in more peaceful surroundings than they live in now. In that age they were advised to understand the Supreme by practicing silent meditation. But in our modern age such meditation is not at all practical. Many groups advertise such yoga, but it is not genuine if they do not follow its strict rules, which require one to sit down all alone in a sacred place, completely fearless and free of sex, holding one’s body erect in meditation for long periods of time.

In yet another past age, the scriptures recommend people to perform costly temple worship by holding elaborate rituals in which huge wealths of butter and gold were offered to the Deity. That also is not practical in our modern age, when there is a scarcity not only of wealth but even of basic natural resources.

Foreseeing the many difficulties of this age, which is called the Age of Quarrel and Hypocrisy, Vedic sages prescribed for us the easy and sublime method of chanting the holy name of God, the Hare Krishna mantra as the most appropriate form of self-realization. The same perfection formerly obtained by silent meditation or costly temple worship may now be achieved simply by chanting names of God. Anyone serious about spiritual life should try, even if only in his spare time, to adopt this easy and authorized method for achieving spiritual perfection.