Gurukul, in Dallas, Texas, is a school unlike any other in America. At a time when this country’s schools are receiving much criticism, the alternative methods of Gurukul are attracting attention. Two public school teachers comment on Gurukul in a talk with BTG’s senior editor, Satsvarupa dasa Gosvami.

Randy Gribbin is thirty-two. He teaches sixth grade in an academically advanced school in northern Texas. 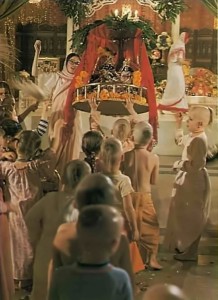 Satsvarupa dasa Gosvami: How did you first become interested in Gurukul?

Mr. Gribbin: I’m preparing a master’s thesis on variegated educational methods, so I was prompted to investigate Gurukul’s controversial teachings. Frankly, I was negatively inclined to begin with, but I tried to approach the situation with an open mind. As a result, I learned a great deal about education and about myself—not only as a teacher, but as a human being as well.

The devotees who teach at Gurukul were very kind; they allowed me to come and go freely and to talk with the children. I observed a lot of effective teaching in Gurukul’s classical Vedic setting. And I talked with many dedicated teachers motivated by love and concern for the children rather than by a paycheck or a higher position in bureaucratic hierarchy. I found that very enlightening.

Satsvarupa: How does Gurukul compare with the public school system?

Mr. Gribbin: For one thing, the children at Gurukul not only learn self-control, but they’re also taught the reason for controlling themselves—to attain God consciousness. Many modern schools have moved toward an open concept, with very unstructured courses. For instance, one hundred students are divided into three classes, and they meet-with three teachers—in one big room. It’s supposed to be conducive to interteacher communication, but the difficulty is that there’s no emphasis on self-control. So in the schools we see a lot of chaotic movement. Children are going this way and that—it’s very confusing.

But the Gurukul style is the one used many years ago. There is a classroom, there are rules, and the children obey the teacher strictly. I think it’s nice to see. At Gurukul, I saw very well-mannered children, who were respectful to others.

Satsvarupa: Why do you think students disrespect teachers in the public schools?

Mr. Gribbin: Because, in many cases, the teachers don’t actually care about the students, and the children can sense this.

In our school we spend most of our time disciplining the children. In fact, discipline is the number one problem. On the other hand, Gurukul is organized: the children come in, sit down and get ready for class. For the most part, public schools’ experiments with unstructured “do your own thing” education have not been successful.

Satsvarupa: What about Gurukul’s emphasis on spiritual teaching?

Mr. Gribbin: Well, in the public schools there is no mention of God anywhere. The children are not allowed to talk about God or to say prayers, and the teachers are forbidden to make any statement about God. At Gurukul, however, the main emphasis is God…

Satsvarupa: But is it a public school’s responsibility to teach about God?

Mr. Gribbin: I feel it’s a basic responsibility of the parents, the churches and the schools to teach the children the fundamental principles of religion. Unfortunately, they’re not doing the job. I think the rise in crime in the schools is directly related to this complete neglect of spiritual values.

Satsvarupa: How does Gurukul compare with the public schools in its teaching of reading, writing and arithmetic? 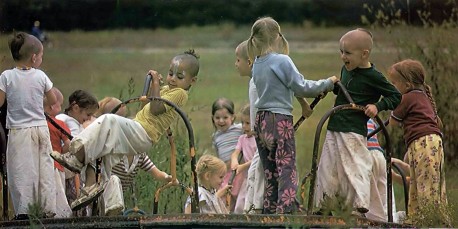 Mr. Gribbin: In the public schools, there’s been an emphasis on modern methods of teaching English and math. In English classes, the emphasis has been on creative writing—no sentences, no grammar, no diagramming—but the result is that now we have high school students who are illiterate. They can’t even write a clear sentence. Actually, in teaching fads or methods, the pendulum swings from one extreme to another. Now they’re seeing the failure of the unstructured programs and they’re becoming more structured. Since the new math books were over the children’s heads, now the books are becoming more basic. But there’s no firm educational philosophy. At Gurukul the educational program has been a very structured program all along. In grammar they’re teaching the parts of the sentence. As a result, the children can read and write very nicely. A young boy read a book to me, and he was able to pronounce long words.

Satsvarupa: What about learning Sanskrit?

Mr. Gribbin: Well, I’ve always been in favor of foreign languages for children. Sanskrit is a basic language, and most other languages are derived from it.

I think learning Sanskrit is good. 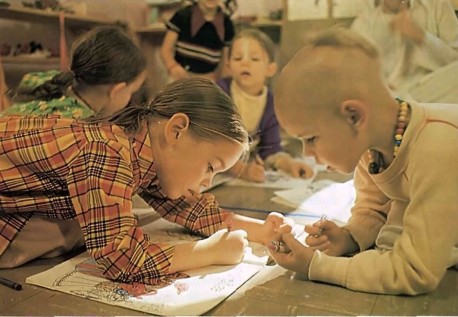 Satsvarupa: At Gurukul, all the children must rise very early in the morning, shower and attend the daily program of temple worship, prayer and meditation. What do you observe as the effect of such austerity?

Mr. Gribbin: I see strong children who’ll be able to live anywhere, under any conditions. They’re not lazy. On Saturdays they don’t spend two or three hours watching Popeye on television. They’re healthy and bright. If anyone goes to a recognized public school and then comes to Gurukul, he’ll immediately see the difference. The children at Gurukul are all wide-eyed and alert, and they concentrate on their studies. Most public school kids are busy dressing up to attract the opposite sex, passing notes and smoking marijuana.

Satsvarupa: In a newspaper article, a New York psychologist said chanting Hare Krishna causes brain damage. What do you think of that?

Mr. Gribbin: Well, from what I’ve seen, there’s nothing wrong with chanting Hare Krishna. What’s wrong with praising God? It cleans my mind to hear it. It must clean the children’s, too.

Satsvarupa: How do you think the Gurukul children will compare with their peers when they graduate? 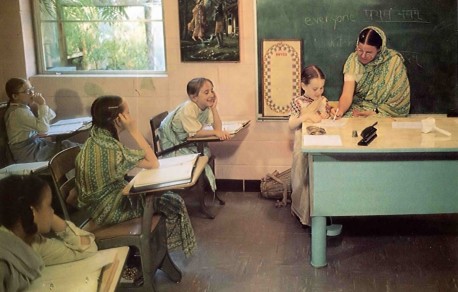 Mr. Gribbin: They’ll be the best educated children in society. Not only will they have knowledge of math and English and history, but they’ll also know their relationship with God. They won’t need material things to keep them happy. I think they’ll be very strong.

Anthony Stachursk has been teaching for nine years in Michigan in elementary, junior high and high schools.

Satsvarupa: What do you think of the discipline at Gurukul, compared with that in the public schools?

Mr. Stachursk: There’s a great deal of dissatisfaction among both teachers and parents with today’s public schools. Up until recently, there hadn’t been enough discipline, but responsible parents demanded it, and now things are going in the opposite direction—away from permissiveness. In our school we have three teachers constantly prowling the cafeteria, yet it’s still bedlam. The difficulty is that there’s no accepted idea of what to do with a misbehaving child. Besides, attempts at discipline are useless it they are not backed up with exemplary behavior by the teachers. Too many teachers are simply concerned with what they’ll do on vacation and how they’ll save on income tax—not with the welfare of the students.

Somehow these problems don’t exist at Gurukul. For example, all the children—even the four- and five-year olds—sit in the dining hall at Gurukul and eat with self-control. They don’t throw their food around or perform other antics you commonly see in public schools. And the teachers are completely dedicated: they spend practically all their time with the children. In the public schools the motivation is mostly money. There’s very little inspiration.

Satsvarupa: What is your feeling about spiritual instruction for young children?

Mr. Stachursk: Well, when I first became interested in Gurukul, I was what you’d call an atheist. I was teaching in a public school at that time, and I came to the conclusion that the public schools don’t care whether the child is religious or atheistic: they simply don’t want the issue brought up in the classroom. For example, a book I was teaching from said that life comes about by evolution, and I was criticized for teaching atheism. Later another teacher was criticized for reprimanding a child who took God’s name in vain. They simply want you to give the information and not give any opinions.

At Gurukul spiritual instruction is given, but it’s based on reason, and it’s given with love by people who are actually leading an exemplary life. Whatever imperfections there may be in Gurukul can be worked out. As far as lack of facilities is concerned, whatever lack they have is only due to a shortage of money. But the public schools cannot be changed, no matter how much money they have, because they lack a spiritual foundation.

Satsvarupa: What do you think these Gurukul children can do for the United States when they grow up?

Mr. Stachursk: I’m sure they can serve society in a variety of ways, either as full-time devotees giving spiritual instruction, or in some other capacity. In any case, spiritual education should be encouraged. What’s perfect about it is the positive direction. What’s the point of education in the public schools? The cities pour so much money into the buildings and systems, but what is the sense of having a Cadillac if it is going in the wrong direction? I find that the teachers in the public schools are lost souls. They have no philosophy, and they admit it. Gurukul is just the opposite. It’s a school with purpose and hope.