Back to Godhead > Devotees > Preaching > Vegetarianism > Cuddy and Maha Brinjal

In this month’s spiritual food article we are presenting two preparations that come down to us from the ancient line of disciplic succession. These preparations are as old as the Vedas themselves, and just like the Vedas their taste is ever refreshing and new. Either of these may be served as a main or a side dish. Also, with a little water added, each can become an excellent sauce for rice or Chapatis (unleavened wheat cakes). 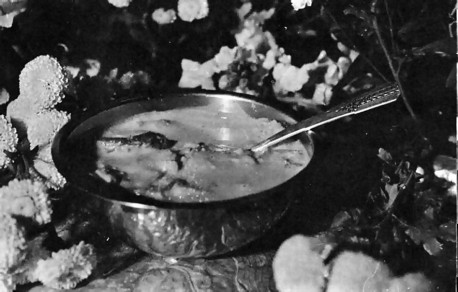 Make a thin batter of chick-pea flour, ½ tsp. salt, 1 tbsp. turmeric, and ¾ to 1 cup of water. Heat ghee or butter in a small skillet until hot. Ghee should cover entire bottom of skillet. Place small spoonfuls of batter in hot ghee. Small circles will form. These are called Pakoras. Cook Pakoras for less than a minute on each side. Save about 1/3 cup of batter. Then, with a mixer, blend together yogurt, remaining water, turmeric, salt and batter. Cook mixture slowly in a separate pot until it begins to bubble. Mixture will thicken slightly. Gently stir in Pakoras, and the preparation is complete. Serves 5-6.

Over high flame heat ghee or butter in large skillet till smoking. Add cumin seed and red peppers. Cook for two minutes. Stir in eggplants. Cover and cook until eggplants are soft as butter. Stir in salt and turmeric. Add tomatoes and cook with no cover for ten minutes, maintaining original high flame all the while. Add spinach. Cover and steam for ten minutes. Remove cover, reduce flame to medium low and cook, stirring frequently, till preparation has the consistency of a thick paste. Serves 3 or 4.