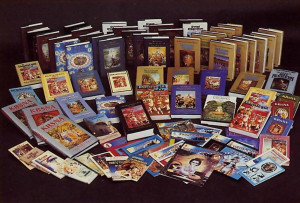 Los Angeles—Just-released Bhaktivedanta Book Trust figures (for the period October 1966 to March 1979) show that Srila Prabhupada’s translations of India’s Vedic literatures now appear in some thirty languages and have gone well over the eighty-five million mark.

Last year the printing total surpassed the previous year’s total by thirty percent, and BBT books appeared for the first time in Danish, Greek, and Kannada (a South Indian dialect).

The demand for Srila Prabhupada’s books seems to transcend all national and ideological boundaries. In the Middle East, people are eagerly purchasing a new Arabic translation of the Bhagavad-gita As It Is, while Israelis are reading a Hebrew edition of Easy Journey to Other Planets. A pocket edition of the Bhagavad-gita As It Is (first printing: 250,000 copies) is proving a bestseller in South America and Mexico.

In India (the Vedic literatures’ homeland) Srila Prabhupada’s books are being translated into Hindi, Bengali, Gujarati, Telugu, Oriya, Marathi, Nepali, Tamil, and Kannada. On their travels throughout the subcontinent, BBT representatives often find themselves surrounded by crowds eager to make a purchase.

Recently Shiv Sharma, Professor of Sanskrit at the College of Buddhist Philosophy in Ladakh, India, said this:

“I have read with great pleasure the books of His Divine Grace A.C. Bhaktivedanta Swami Prabhupada, the founder-acarya of the International Society for Krishna Consciousness. At long last a noble heir to the tradition of India’s eternally glorious message has rendered our Sanskrit literature in such a way that our English-speaking brothers in the West may easily understand it. This should be a matter of great pride to all of us.

“The manner in which His Divine Grace has presented Srimad-Bhagavatam, the encyclopedia of Vedic culture—with specially prepared illustrations, original Sanskrit script, Roman transliterations, word-for-word synonyms, verse index, and table of contents and extensive general index—is a literary wonder of the world. Also, his clear and precise commentary make these volumes masterpieces of study for lovers of Vedic wisdom.

“Srila Prabhupada’s books teach the principles of brahminical culture, namely no intoxication, no illicit sex, no gambling, and no eating of meat, fish, or eggs. The value of his writings is seen in that he has molded for the better thousands of lost lives.

“As an educator, I highly recommend these books to all school, college, and university libraries.”