Back to Godhead > ISKCON > News > A Summer of Hare Krishna Festivals

A Summer of Hare Krishna Festivals

A Summer of Festivals 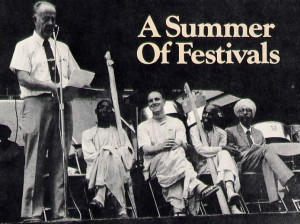 In Natal, South Africa, home of the largest Hindu community outside India, a crowd of twenty thousand turned out to follow three fifty-foot-high chariots down the city’s main streets in a three-mile procession celebrating Ratha-yatra, the “Festival of the Chariots.” Organized by the more than five thousand Krsna devotees of the International Society for Krishna Consciousness in South Africa, the festival appeared on local television and ended with a lecture by Srila Jayatirtha Goswami, the Society’s coordinator for South Africa and the U.K.

In Vancouver, Canada, Mayor Jack Volrich was guest speaker at the Chariot Festival organized by the Hare Krsna temple and local Hindu organizations. Mayor Volrich said, “I hope this Festival of the Chariots, one of the greatest historic festivals in the world, will become an annual event in Vancouver … so we will be able to share some of the very important, sincere, and deep principles of morality that you espouse. … I think it is very appropriate that the city proclaim one day of the year as Ratha-yatra Day.”

Ratha-yatra, a festival for the pleasure of Lord Krsna, has been celebrated in Pune, India, for the last two thousand years. It annually attracts some twenty million to thirty million pilgrims. The International Society for Krishna Consciousness sponsored Ratha-yatra festivals this year in New York, Chicago, Los Angeles, Toronto, Calcutta, and other major cities. 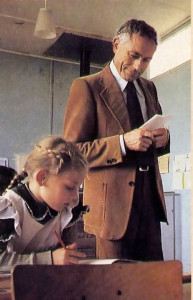 Mr. M. Conte of the French Ministry of Education examines a student’s workbook at the Krsna conscious elementary school in Indre.

Lucay-le-Male, France—The Regional Inspector for the French Minister of Education recently awarded glowing appreciations and a certificate of authorization to the primary and secondary schools of the Hare Krsna movement in France.

The schools occupy five buildings and two of the 180 acres of the movement’s farm in the fertile Indre region of central France. M. Conte, Regional Academic Inspector for the Education Ministry, commented after his visit, “I find here hard work and seriousness of purpose. This has been a very encouraging visit for me.