Back to Godhead > ~Featured~ > Condolences for Jayananda Prabhu 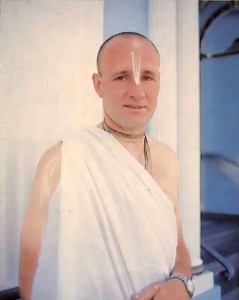 On May 1, just four days after his thirty-eighth birthday, Srila Prabhupada’s very dear disciple Jayananda dasa passed away in his quarters at the Los Angeles Temple complex (New Dvaraka). For the last few months his body had been ravaged by leukemia, and recently he had abandoned all attempts at recovery and, preparing for the crucial time of death, moved to New Dvaraka to immerse himself in the pure association of Lord Krishna’s Deity and His devotees.

Jayananda joined the San Francisco Radha-Krishna Temple early in 1967, just after it opened and less than a year after Srila Prabhupada founded the International Society for Krishna Consciousness in New York City. Though he had both an engineering degree from Ohio State University and a San Francisco State Teachers College degree, Jayananda was then supporting himself by driving a taxicab. He was looking for a way to make life simple. At twenty-eight, he became the senior devotee in San Francisco, and soon the temple president.

Mukunda dasa, who was there at the time, told us about Jayananda’s rare qualities: “He proved himself to be the most responsible and selfless person. You could never detect even the most subtle type of wish to satisfy his own personal needs. He had that very unique attribute—whatever needed to be done, he would do. He was driving his taxicab fifteen hours a day or more to get overtime to pay the temple’s rent and various other expenses, and he was looking after fifteen or twenty new brahmacaris [celibate students].”

Over the years Jayananda took special interest in the annual Ratha-yatra festival (please see “The Festival of the Chariots,” page eight). He would plan the festival, build the carts, cook and distribute the prasada (spiritual food offered in love to Lord Krishna). During his last days he was always planning how to expand Ratha-yatra so that more temples could participate. Incapacitated as he was, he still helped design the special carts now being built in Los Angeles, which can be disassembled for easy transportation from city to city.

He reasons ill who says that Vaisnavas die
When thou art living still in sound!
The Vaisnavas die to live, and living try
To spread the holy name around.

The following letter, dated May 5, arrived from Srila Prabhupada just before we went to press:

I am feeling very intensely your separation. In 1967 you joined me in San Francisco. You were driving my car and chanting Hare Krishna. You were the first man to give me some contribution ($5000) for printing my Bhagavad-gita. After that, you have rendered very favorable service to Krishna in different ways. I so hope at the time of your death you were remembering Krishna and as such, you have been promoted to the eternal association of Krishna. If not, if you had any tinge of material desire, you have gone to the celestial kingdom to live with the demigods for many thousands of years and enjoy the most opulent life of material existence. From there you can promote yourself to the spiritual world. But even if one fails to promote himself to the spiritual world, at that time he comes down again on the surface of this globe and takes birth in a big family like a yogis’ or a brahmanas’ or an aristocratic family, where there is again chance of reviving Krishna Consciousness. But as you were hearing Krishna-kirtana, I am sure that you were directly promoted to Krishna-loka.

Krishna has done a great favor to you, not to continue your diseased body, and has given you a suitable place for your service. Thank you very much.
Your ever well-wisher,
A.C. Bhaktivedanta Swami

One Response to Condolences for Jayananda Prabhu