Bright Day of the Soul 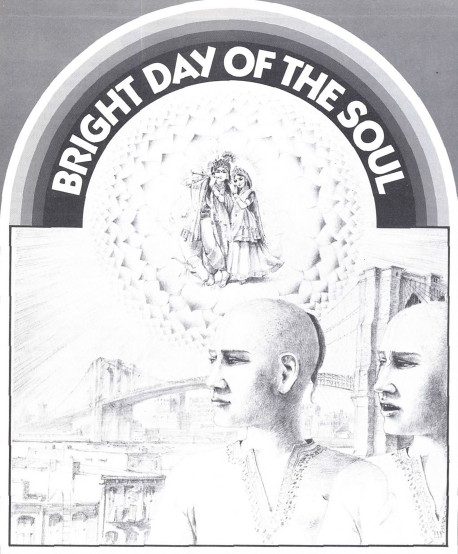 We stood on a rooftop in Manhattan, gazing out over the East River and the Brooklyn Bridge toward Brooklyn. His friend for many years, I asked him, “Do you actually love Krsna?” He thought for a second. “I love pleasure,” he said finally. “To be truthful.”

“Is Krsna giving you that pleasure?” I asked.

“Theoretically I admit that He is,” he said. “For I know that Krsna is the reservoir of all pleasure. But I often feel that the pleasure I’m taking is not to His liking.”

“To what do you attribute this?”

“Envy,” he said unhesitatingly. “He is infinite, and I am finite; He is powerful, and I am weak; He is opulent, and I am poor; He is beautiful, and I am brutish; He is famous, and I am insignificant; He is wise, and I am foolish; He can renounce everything, but I can deny myself nothing. Is there no wonder I am envious?”

“If He has all these qualities,” I asked him, “why don’t you love Him?”

“Because I cannot see Him,” he said.

“Your position is pretty sorrowful,” I said. “What can I do about it?”

We fell silent for a moment. I watched the seagulls pivot about the bridge in white circles. We had come up dark and narrow stairs to the bright day at the top of the roof. I noticed that he automatically felt his back pocket.

“What are you looking for?” I asked.

“But you said everything belongs to Him,” I laughed. “How can you lose anything that is not yours?”

“You might say that,” he relented. “Whatever I have He’s slowly taking back because I’ve stolen it from Him. I have some beauty, but every day He is slowly taking that away. I have some strength, but the longer I live the less strength I have. When I was in college I felt that I was acquiring knowledge, but now not a day passes when I don’t feel myself more and more foolish. I used to think of myself as the center of the universe, the most important person alive, but now I only feel my insignificance as one of three billion people on a tiny planet destined to live only three score year and ten and to be buried in a grave that hardly lasts any longer. As you see, my friend, my position is not very enviable; therefore I envy.”

“But what of love?” I asked. “What of your capacity to love?”

“You seem conscious of Him,” I said. “Isn’t that at all auspicious?”

“Would you consider the position of one holding but a faded photograph of his lover an enviable position?” he asked. “I may see Him in the beauty of the sky, in a landscape, or in another person, or I may hear Him in a voice or in the lyrics of a popular song, or I may smell Him in the fragrance of gardenias or the musky twilight, or I may taste Him in the freshness of water or a just-cut melon, or I may touch Him when I feel someone beside me—but these are just memories. These are not Him.”

“Perhaps they are Him,” I suggested. “But perhaps He is teasing you.”

“Then He is a good teaser,” he admitted. “I often see myself running in circles like a dizzy schoolgirl, just waiting for Him to pay me a little mind.” He laughed at the image he had conjured of himself. “We are all female,” he said finally, “at least in respect to Him. He is the enjoyer, and we are the enjoyed. Isn’t it the position of the female to be enjoyed?”

“No one enjoys being controlled,” I said. “Surely you’re mistaken.”

“In all cases but love you’re right,” he said. “But in love we secretly want to be controlled. This is because we need direction, and we feel that the object of love can give us direction. Therefore love always concentrates on its eternality. When we love someone, we always feel, ‘I love you forever.’ In other words, ‘Love’s not time’s foot, though rosey lips and cheeks within his bending sickle’s compass come. Love alters not with these brief hours and weeks, but bears it out even to the edge of doom.’ If love is not forever, then it is not love. We all feel this in our love relations, and we ask no less from our lover but that he pledge eternal love. Practically speaking, though, isn’t this unreasonable to ask? Eternal love. Who is capable of that?”

“The eternal lover,” I smiled.

“Then that’s who we actually love,” he said. “Anyone other than that is but a poor substitute.” 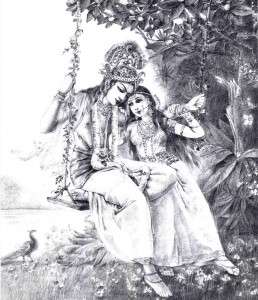 “You speak of the Eternal Boy,” I said, “but I want to see the eternal girl. It is she who interests me.”

“She is His,” he said. “Why should she be interested in you when she has Him?”

I did not answer. We looked a long time at the long rows of buildings before us and through the hot haze of cars moving slowly along the shores of Brooklyn. 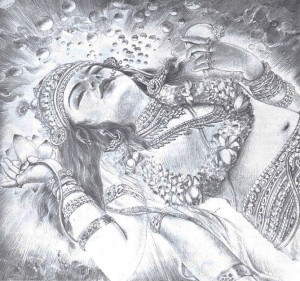 “These bodies of ours are like flashes,” he mused. “We no sooner cultivate them but they grow old and diseased, and they die. We no sooner learn to enjoy ourselves here than we are quickly taken away. All we need know is that whatever we see in the world that is beautiful or magnificent is but a reflection of Him. We need not even think in terms of him and her, as Sukadeva Gosvami did not even perceive sexual distinctions but saw all creatures as living entities, intimately part of Him. The great sages travel through life without losing a glimpse of His presence. In comparison to them, we are like confused children, running from this object to that for satisfaction. Instead of satisfaction, all we find is pain, pain inflicted by other living entities, by nature and by our own minds and bodies. All we want is to drink the waters of satisfaction, but all we get are the waters of discontent. All we seek is the nectar of His lotus feet, but all we get is the bile of our own doubt. Because we are weak, we have ceased to even search for Him. Because we are deaf, we have ceased to even hear of Him. Because we are callous, we have ceased to even feel Him. Because we are poor, we have ceased to even hope for Him, and because we are not renounced, we have forgotten Him. Our only hope is that out of pity He will turn His lotus eyes to us, and out of pity He will allow us to glimpse the waters of the Yamuna River where He bathed and splashed with His feet. Our hopes may not seem realistic, but they are great because they are directed to the great. We have no conception of how great He is. We can only think of this one body, or one nation, or one planet, or one universe. But simply with one exhalation innumerable universes emanate from the pores of His skin, and with one inhalation they all return to His body, and in this way the entire cosmic creation is manifest and annihilated according to a time cycle beyond our powers of comprehension, for universal time loses all significance in the face of what we have to call eternity.”

“He exists in eternity?” I asked.

“The freedom to turn to Him or avoid Him?” I asked.

“The freedom to love Him or not,” he replied. “For without freedom there can be no love. If I were God, I could certainly force you to love me, but that would not be love. Love is not forced by someone exterior. Love is response, relationship, communication. Love is the assertion of our being, of our essence as living entities. If we were not allowed freedom to love, we would be puppets only. There is Krsna and His creation; Krsna is complete in Himself, and the creation is complete in itself. All the qualities that are in Krsna, including the quality of freedom, are also in the creation in minute quantity. Now we must understand that as His creation, we are meant to give Him pleasure, and in giving Him pleasure, we receive it in return. But who knows of this? We have fallen, and our concern is now just with ourselves. We are like the chained prisoners of Socrates’ cave, enjoying the pageant of shadows about us, content with squinting in the darkness.”

“We need direction,” I said. “Without it we’re bound to the cave and the cycles of birth and death.” 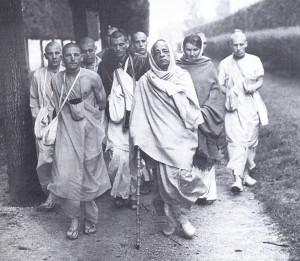 “The spiritual master has come within the cave singing His names,” he said. “And now he’s leading us out. We must be careful not to hide in the crevices or to lose his voice around the dark corners. We have to listen, not lose his voice, and hasten in the dark after him, trusting that he is leading us out into the light, for he has come from the light and knows the way. Is there any other who knows our destination? We may think we know our position on a map, but who knows the destination of mankind? Where are we going? What was our past? We can’t even remember the past events in this our present life, but Krsna tells Arjuna, ‘Many, many births both you and I have passed. I can remember all of them, but you cannot.’ And He also tells Arjuna that there was never a time when He did not exist, nor Arjuna, nor all the kings at Kuruksetra, nor that in the future any of them shall cease to exist. Krsna tells us clearly of our eternality and destination, and if His song is too lofty for our comprehension, if we cannot hear it in the depths of the cave amidst the panoramas of shadows projected by desire, the spiritual master actually descends to guide us. Our destination is beyond the irreversible succession of events through which we pass out of that cave. Our destiny indeed is to leave that cave, and to arrive. Our journey is our actual evolution, our soul’s evolution through material bodies that but serve us in our escape. Our soul’s progress is symptomized by consciousness, and in its highest state the soul is conscious of Krsna, of its ultimate destination, of its home.”

We looked out again across the rooftops toward Brooklyn. The city was hot and seemed to be roaring in pain about us, like an enraged bull. A blast of heat from the streets, of deadly fumes, swept up like an angry sigh.

“After all,” he said, “Home is not so different from what we expected—a quiet and simple place in the country with lots of trees and cows, and Him there, ready to play, stopping and waiting for us.”