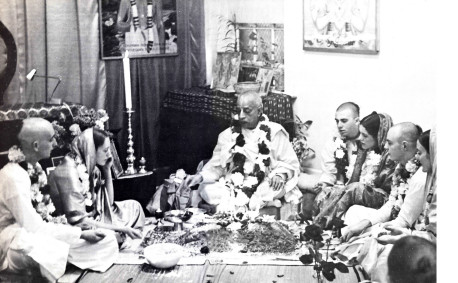 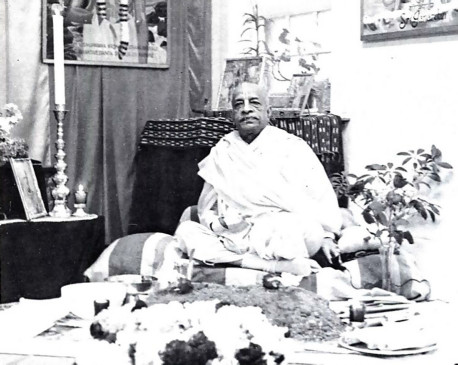 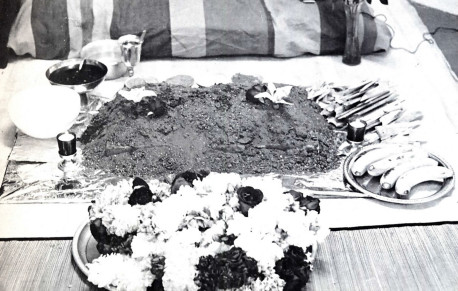 The most important celebration in the study of God realization is the initiation ceremony, when the student agrees to live by the orders of the spiritual master who has understood the necessity for a program whereby one can gain control over his sensuous activities. In Krishna Consciousness we use the word control because we do not teach that one should cease his sensuous activity, but that he should perform that activity in the pursuit of higher spiritual life. Then that same activity, when performed under the regulative principles of the spiritual master, becomes devotional service or Bhakti Yoga. This devotional service when performed with a pure heart has not only the power to simply release one from the sufferings of this material world, but also to raise one to the platform of love of God.

After a boy is initiated into Krishna Consciousness he is called a “brahmachari,” a renounced student. A brahmachari is by Vedic custom supposed to be very austere. He should simply lie down on the floor to take rest, he should strictly regulate his eating and sleeping, and he should have no association with the opposite sex. After some time as a brahmachari, a boy may decide whether he wants to remain in this renounced order of life or if he wants to become a married man. Present-day society is not designed for developing spiritual life—there is too much intermingling of men and women—and so our spiritual master, His Divine Grace A.C. Bhaktivedanta Swami Prabhupada, recommends that most of the brahmacharis become responsible married men and raise Krishna conscious families.

Accepting a wife is also considered renunciation, because the student is voluntarily sacrificing his tendency toward unrestricted sex life for a program of regulated restraint to develop his spiritual consciousness. When a brahmachari decides to marry, the system is that he should consult his godbrothers and ask their advice. If they agree that marriage is the best thing for his spiritual advancement, then he should submit his plan to the spiritual master for approval. Upon approval of the spiritual master an eligible girl is chosen, either by the spiritual master himself or by the brahmachari’s godbrothers. It is best if neither the boy nor the girl has choice in selecting this lifelong companion. Marriage is not for sense gratification, and therefore the partner should not be selected on the basis of sexual attraction, but on the couple’s desire to work hard together for the spiritual master.

On May 8th of 1969, the Krishna conscious society had a wedding of three couples at the Boston Radha Krishna temple, as depicted on these pages. The couples learned of the marriage one day prior to the actual ceremony. Krishna Consciousness means simple living, and so there was no problem preparing for the event in such a short space of time. The boys gathered together enough money to purchase new saris for their prospective brides, and the women on the day of the ceremony made garlands of flowers for themselves and their prospective husbands. Someone was put in charge of collecting the necessary items for the ceremonial fire—rice flour colored with dye, small pieces of wood for fuel, sesame seeds, barley and bananas to sacrifice in the fire, and clarified butter to make the fire burn brightly. 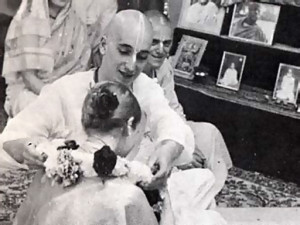 “Married life for Krishna Consciousness is all right. My spiritual master was a strict celibate all of his life, but he used to say that if he could raise children in Krishna Consciousness then he was prepared to indulge in sex life one hundred times. In The Bhagavad Gita Krishna declares that sex life based on religious principles is a representation of Himself. The regulative principle that married couples should follow regarding sex life is that it should be avoided except for the propagation of children, and then only indulged in once a month until pregnancy. If the couple does not desire children then sex life should be avoided completely. This is known as natural birth control. In our Krishna Consciousness society we are not teaching the cessation of activity, but the regulation of activity. It is natural for young boys and girls to be attracted to each other and to desire enjoyment, but they should not act unrestrictedly on the platform of dog or cat consciousness. Let them be married and live peacefully. In all forms of life there is eating, sleeping, defending and mating. The human form also indulges in these activities, but in the human form there is a fifth activity which distinguishes it from the society of the animals. This we call religiousness. 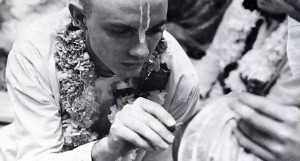 “True religiousness begins when one asks himself, ‘Why am I suffering? Who am I? What is my true position?’ If someone, no matter who or what he is, sincerely looks for the answers to these important questions and if he has accepted a bona fide spiritual master, then he is said to be on the path of religiousness. Our Krishna conscious society is meant for supplying the answers to these questions as they are answered by the Supreme Lord Himself in various scriptures such as The Bhagavad Gita, Srimad Bhagwatam, Chaitanya Charitamrita, etc.

“Parents, please give your blessings to your children. Let them be happy for the benefit of society, country and humanity.” 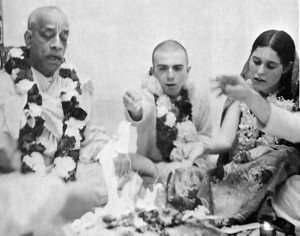 Prabhupada then asked the parents to repeat these words in giving away their daughters: “She has been in my charge for so many years, now I hand her over to you.” The man accepts this offer by answering, “I accept her as my wife for my entire life. I agree to protect her and provide for her needs.” Next the woman confirms the marriage by agreeing to serve her husband and provide for his comforts in this life. The smiling couples then trade flower garlands and change their sitting arrangement: the wife sits to the left of the husband and the husband covers his wife’s head with the loose part of her sari. The distinguishing mark of a married woman is the red streak of pigment found in the part of her hair at the center of her head. This is now placed there for the first time by her new husband. 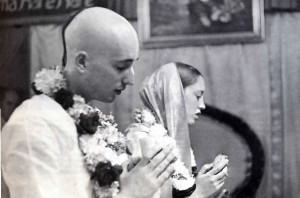 When all the couples have been married in this manner, it is time to light the sacrificial fire. The colored rice flour is sprinkled across the earthen bed where the fire will burn so that a colorful arrangement of lines is produced. In the center of this is placed a burning splinter which has been dipped in ghee (clarified butter) and lit by a candle. This is followed by more splinters dipped in ghee, the pieces becoming larger and larger until the flames are rising two feet into the air. All of the happy newlyweds are crowded around the hot fire. Sweat appears on their brows but they can barely move back because of the crowds of friends and relatives behind them pushing forward to reach the sesame seeds and barley, which has just been mixed with ghee, and which is being offered for everyone to throw in the sacrificial fire. The spiritual master is chanting sets of mantras to please the Supreme Personality of Godhead, Sri Krishna, and everyone is loudly repeating these. Each set of mantras is ended with “Shaha!” This is the signal, everyone answers with an ecstatic “Shaha!” and for a moment the temple appears to be raining sesame seeds and barley as everyone throws their small handful into the fire. 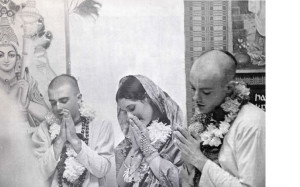 After the mantras are chanted, the spiritual master motions for the couples to stand. They are handed bananas which they place between their folded hands. With heads bowed in submission they repeat the beautiful mantra being chanted by the spiritual master, and at the end place their bananas in the fire. Ghee is poured over the bananas and the names reach higher into the air. By this time the temple is filled with smoke and no one can tell if the tears in the eyes of the devotees are caused by smoke or by the bliss of the joyous occasion. All the couples now bow down, their heads to the sesame-seed-covered floor, and by a mantra offer their obeisances, their minds, their hearts, their lives to the spiritual master, who simply says, “Thank you very much. Chant Hare Krishna.” Hearing this the devotees leap into the air, grab at cymbals and drums and begin loud chantings of the Hare Krishna Mantra. By now everyone’s eyes are full of tears and sweat is pouring from their brows as the flames of the fire shoot three and four feet into the air. But nothing will stop these merry madmen from having their Kirtan in praise of Lord Krishna.

The crackling of the bananas, the heat and smoke from the fire just add bliss to the already ecstatic chanting and dancing scene. Many are jumping into the air yelling, “Hari Vol!” Others are beating furiously on drums, crashing together small hand cymbals, or simply clapping their hands together loudly. Hare Krishna chanting continues for half an hour or so and is ended by a nod of the head from His Divine Grace. Everyone falls to the barley-covered floor and prostrates himself before His Divine Grace, who is chanting respects to all of the greater teachers and holy places where Lord Krishna had His pastimes. All then assume the sitting position and the temple quiets down, except for a few devotees who can’t quite check their crying or laughing in ecstasy. They sit slowly shaking their heads from side to side in disbelief that there could be such bliss in praising the sweet Lord, Sri Krishna. With a broad smile on His face Prabhupada asks the married couples if they are happy. They simply nod, “Of course!” is in their eyes. In their minds they are thinking: if only I had something more than my whole life to offer my spiritual master. 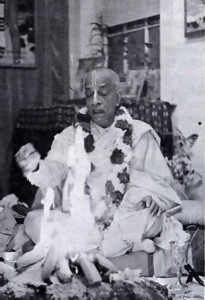 His Divine Grace is now offered a plate of Prasadam (food offered to Lord Krishna) and His eyes sparkle as he sees the sweetballs, samossa, Kachori, Radha Ballabhi, Rasgolla and fifteen other preparations. He takes a few small bites and asks that everyone be fed. Seconds, thirds and even fourths are being demanded by even guests who have never before seen a Prasadam feast. At some time during the feast His Divine Grace rises to leave. All immediately fall to the floor offering obeisances, and then jump up to accompany him to the door yelling “Hare Krishna! Hari Bol!” On his way out he turns, throws his hand in the air, and says again in a majestic voice, “Chant Hare Krishna!” The devotees, feeling his love, return to the feast, some still shaking their heads in bliss, others saying softly, “Hare Bol,” or “All glories to Prabhupada.” After some time the guests slowly begin to leave and the newly married couples prepare to leave for their respective new homes to join together in long and happy lives in praise of the sweet Supreme Lord, Sri Krishna.