Back to Godhead > Devotees > Chanting > Boston Samkirtan 1969 in Photos 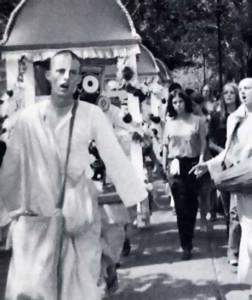 The Boston center has been eager to fulfill the wish of our beloved Spiritual Master Goswami A.C. Bhaktivedanta. Coming in the line from Lord Chaitanya Mahaprabhu, who so much stressed the public chanting of the Holy Names, our Guru has always instructed us that the best preaching of Love of God is the chanting of the Holy Names of God in the parks and in the streets. The benefit to every living entity—not just the humans—is inconceivably great. Just by hearing the Name of God one can be saved from the greatest danger, and his door to liberation, for eternal association with Krishna, will be opened. Lately, we have received letters from His Divine Grace emphasizing the importance of the chanting party: “Regarding your questions about Samkirtan party, I think you should try to always have Samkirtan going on. All other things are subsidiary. This chanting is our life and soul, so we must arrange our program so that there will be as much chanting on the streets and at college engagements as possible.” (from letter of May 15, 1969) 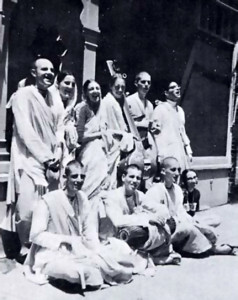 We usually reach Boylston Street every day by 12 noon. Boston is very busy during the day, and at noon on Boylston we are able to reach thousands by chanting and instruct them in the sublime teaching of blissful eternal life lived with Krishna. His Divine Grace has written us, “Not only does chanting liberate us from all material impediments and diseases, but even in our conditioned state we like to hear the sweet melodious sound of the chanting. Only a person who is committing suicide or who is addicted to animal killing cannot relish the sweetness of this chanting. But even if they take to this chanting, they will become liberated.” (letter of May 13) 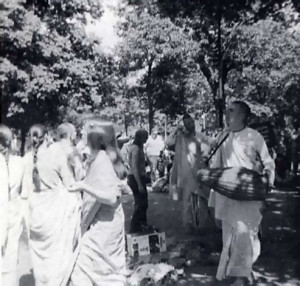 After Boylston Street, we take the Samkirtan van, which is a completely spiritualized vehicle used only in the service of the transcendental Lord, and drive to nearby Harvard Square, Cambridge, where thousands await the Deliverance of the vibration from the spiritual sky, Hare Krishna, Hare Rama. About our transcendental van, Prabhupada has written us, in his letter of May 13th, “Now you have got a nice carriage and thus you can go anywhere you like.” Harvard Square is supposed to be busier per square foot, and its real estate more commercially desirable than any other area in the country. In order to chant in such a crowded area without causing any civil difficulty, we had to inform the police of all our activities beforehand. Regarding this matter, Prabhupada Bhaktivedanta has written us, “Try to keep nice peace with the police as far as possible. Because our method is to be more tolerant than the tree and humbler than the grass on the street. We don’t mind for so-called prestige. If keeping peaceful we can execute Krishna conscious duties, that is all we want.” (letter of May 31st) 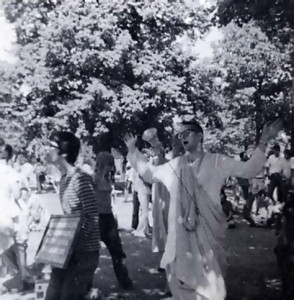 The scriptures declare that the Maha mantra is an incarnation of Krishna, or God, for this age. Under the order of our Guru, we appear sometimes at Fenway Park and sometimes along the Charles River, and every Sunday about 10,000 people who gather at the Cambridge Commons are exposed to the Hare Krishna benediction. We go wherever people gather, and sometimes, when we begin chanting where nobody is around, a crowd automatically gathers to hear the Names and see the dancing in glorification of Krishna. At all such gatherings we pass out wallet-sized cards which say, “We humbly request, you chant this mantra and your life will be sublime: Hare Krishna, Hare Krishna, Krishna Krishna, Hare Hare/ Hare Rama, Hare Rama, Rama Rama, Hare Hare.”

Lord Chaitanya said the chanting would be spread to every town and village in the world. So we at least must spread it to every street and person in the Boston area.