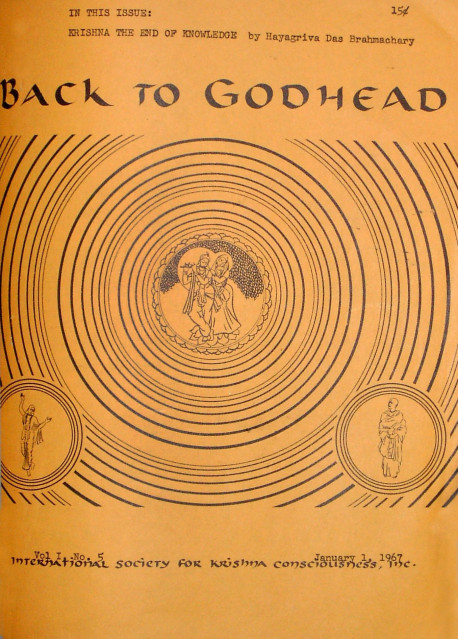 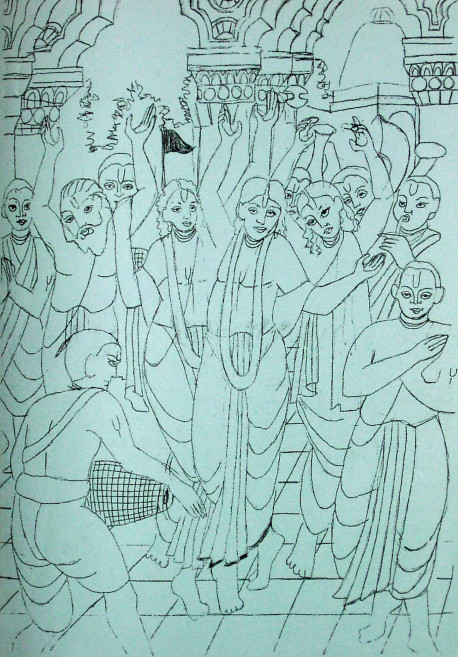 By the mercy of Krishna:

The editors of Back To Godhead, along with our revered teacher, Swami Bhaktivedanta and our godbrothers of the Society, wish to express our deep hopes for a happy New Year—one in which peace and enlightenment may bless the hearts of all men. This, of course, is not just a holiday greeting, but the fervent motivation of our lives in devotional service the year round. Praise be to Krishna for giving us such a sweet task.

The picture which follows our cover in this issue is the product of our new art director, Jodavani Devi Dasi. It portrays Lord Sri Chaitanya Mahaprabhu and His disciples during kirtan. When He was present on this earth four hundred and eighty years ago, Lord Chaitanya introduced the ancient practice of Samkirtan as the remedy for the ills of our present age, and it is this remedy that is being promulgated by this Society.

Our record album, tentatively titled “Krishna Consciousness”, has yet to appear, but we’re hoping to have it released within the next two weeks.

Our San Francisco activities have been postponed until late in January, but a temple and center there are now being established. So it looks to us as though Krishna Consciousness is destined to grow and to influence events on the American West Coast. We hope this is but the modest beginnings of a world-wide movement. The influence of the kirtan movement stands to reason—after all, who has more influence than the Supreme Personality of Godhead?