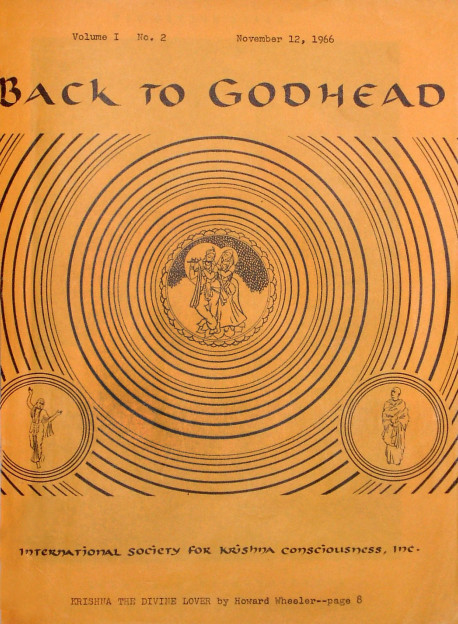 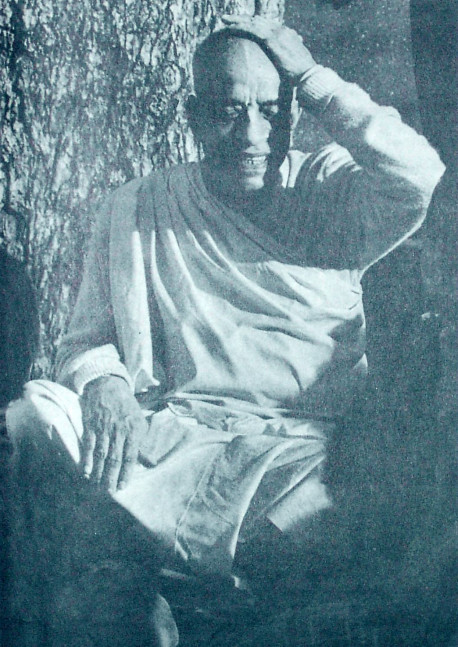 This is the second issue of Back To Godhead, a publication devoted to promulgating bhaktiyoga, the science of God as expounded by Lord Sri Krishna in the Bhagavad-Gita. The International Society For Krishna Consciousness was incorporated in July, 1966. Over a short four months the Society has expanded sufficiently to warrant larger quarters than the small Second Avenue storefront temple. Therefore the Society is presently negotiating for the Temple Emanu-El building on Sixth Street (between First and Second Avenues). This building could provide living quarters for some 75 full time devotees, and would give the Society an auditorium for larger mass kirtan (singing and chanting) as well as provide space for other activities. To raise funds for the building and to acquaint more people with the kirtan movement and the philosophy of the Gita, the Society will hold kirtan at the Gate Theater, 162 Second Avenue (between 10th and 11th Streets) on the next three Sundays, November 13th, 20th, and 27th, and a kirtan and talk by Swami Bhaktivedanta at Judson Hall, 165 W. 57th Street (between Sixth and Seventh Avenues) November 15th at 8 p.m. The Gate Theater performances will be benefit performances for the new building, but admission is free for the Judson Hall concert. Many downtown New Yorkers have become acquainted with “kirtan” recently through the Tomkins Square Park meetings over the past four Sundays. Since the weather will not permit outdoor kirtan, we hope to be able to offer this program in a new building that will enable more people to participate, without being crowded into a small storefront.

Even more New Yorkers became acquainted with the “Hare Krishna” chant recently at the November 5th Peace Parade from Tomkins and Washington Squares up to Times Square. The New York Times approximated that some 10,000 parade participants were protesting the Vietnam war, though the number looked closer to 30,000. Poet Allen Ginsberg, a friend of this Society, led the “Hare Krishna” mantra during the three hour jaunt, and many in the parade took up the chant. The scene might have duplicated Lord Chaitanya’s march some five hundred years ago when the Lord led thousands of people chanting “Hare Krishna” to the local magistrate’s building because the magistrate forbade chanting the praises of Lord Krishna in the streets. Poet Ginsberg, wearing white Gandhi pyamas and a stars and stripes top hat, sang the “Hare Krishna” chant to harmonium accompaniment at Times Square, and said that “Hare Krishna, Hare Krishna, Krishna Krishna, Hare Hare, Hare Rama, Hare Rama, Rama Rama, Hare Hare” was “a magic formula chant to the gods of preservation that calms peoples’ hearts.” We also feel that when mankind sings the transcendental praises of the Supreme Lord instead of the praises of nationalism and materialism, he will not only have “peace on earth” but will have peace in his heart and soul.