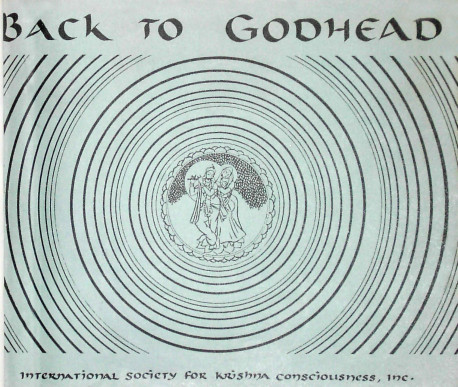 Godhead is Light, Nescience is darkness.
Where there is Godhead there is no Nescience.

God appears, and God is Light,
To those poor souls who dwell in Night;
But does a Human Form display
To those who dwell in realms of Day.

Blessings of Krishna! BACK TO GODHEAD is a bi-monthly publication issued by the International Society For Krishna Consciousness. This publication is principally concerned with promulgating through the medium of essays, poems and articles the truths expounded by Lord Sri Krishna in the Bhagavad-gita. Swami A.C. Bhaktivedanta, our spiritual leader, stresses that although Krishna and Rama took their births in India, they are not solely the “property” of India or Indians any more than Christ is the “property” of the Middle East. God and His truths know neither boundaries nor nationalities. Narrow sectarianism and ethnocentrism are only pitfalls on the path to liberation. God is neither Christian nor Jew, neither Moslem nor Buddhist nor Hindu—He is beyond all such designations. He is, in the Gita, Krishna, the Knower Who is not known, the Enjoyer, Who, in His spiritual Kingdom, enjoys Bliss-Knowledge-Absolute.

True devotees of Krishna neither reason nor argue about Him. “He who replies to words of Doubt, Doth put the Light of knowledge out,” wrote Blake. For the devotees, Krishna is an established fact. The devotees do, however, spread “Krishna-consciousness” to others, to convince them of Krishna’s existence through the “science of devotion.” Devotion to God is a “yoga,” a science, and it is to teach this science that Swami Bhaktivedanta has come to America. His method is simple: the chanting of the Holy Name of God, “Hare Krishna, Hare Krishna, Krishna Krishna, Hare Hare, Hare Rama, Hare Rama, Rama Rama, Hare Hare,” a sixteen word chant prescribed by Lord Sri Chaitanya Mahaprabhu in the 15th and 16th centuries as being especially effective in this age of “Kali,” an age characterised by atheism, ignorance, chaos, and disagreement.

Spiritual foods, dancing, singing and chanting the praises of the Supreme Lord, study of the Bhagavad-Gita and Srimad-Bhagavatam are all parts of this bhaktiyoga method. This method boasts such illustrious adherents as Brahma, Shiva, Laxmi, Kumara, Narada, Vyasadeva, Madhya, Chaitanya, Bhaktisiddhanta and Swami Bhaktivedanta in the East, and, in the West, many of the Christian saints, St. Augustine, Meister Eckhart, Socrates, Plotinus, St. Theresa, St. John of the Cross, William Blake and Whitman. Now in the West, with a sudden resurgence of interest in God-consciousness, spiritual education is needed more than ever. As a confused mankind begins to enter into its third global war in this century, it is the duty of those advanced in bhaktiyoga to speak out and educate the unenlightened.

It is partly with such quixotic intentions that Back to Godhead is being issued. Following the orders of his spiritual master, His Divine Grace Sri Srimad Bhaktisiddhanta Saraswati Goswami Prabhupada, Swami Bhaktivedanta began the initial publication of Back to Godhead in 1944. This bi-monthly, published from 1944 to 1956 in Vrindaban, India (Vrindaban, 90 miles southeast of Delhi, was Krishna’s playground during His stay on earth.) established Swami Bhaktivedanta as the leading Personalist in India. This issue marks the first publication of Back to Godhead in the West. The editors welcome suggestions, essays, poems, letters, and articles concerned with Krishna katha (topics).