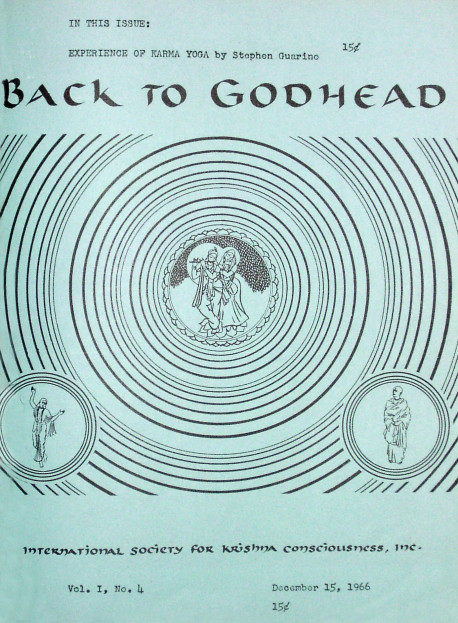 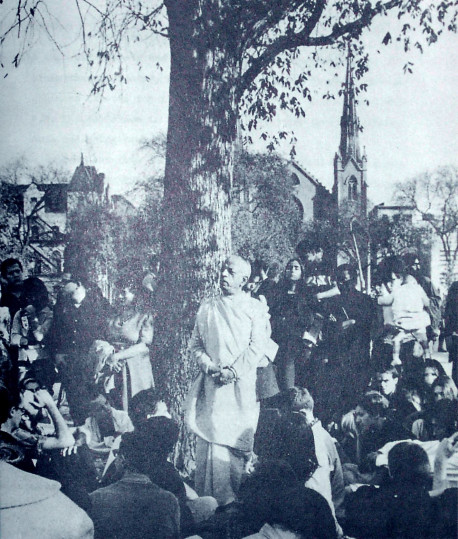 Our Society has been holding Kirtan at Film Makers Cinematheque Theater, which is at 125 West 41 Street. Our engagement extends for all four Sundays in December, from 3 to 6 P.M. The admission is free and the invitation is open—please come and bring your friends.

By the time this issue of Back to Godhead is released, our 33-1/3 LP album of chanting should be on sale in various parts of the city. The record features our regular Kirtan, as well as some mantra sung by Swami Bhaktivedanta. So natural is the urge to rejoice while listening to this chanting of the Lord’s names that everyone—company personel and onlookers included—began dancing during the last session at the recording studio. This is the real meaning of Kirtan: Rejoice, and glory to the Lord!

Within a month of this date Krishna Consciousness should have arrived in full bloom on the West Coast. We’re hoping to open a center there, in San Francisco, within the next month. In mid or late January, there will be a Mantra-Rock Rejoicing, at which the Swami will appear. Also aiding in our program will be Mr. Allen Ginsberg, who has already rendered much valuable service to Krishna, especially in propagating the chanting of the Hare Krishna Mantra.

We’ll have more to say about the West Coast next issue—since that’s where the editors expect to be, laying groundwork for the Swamiji.