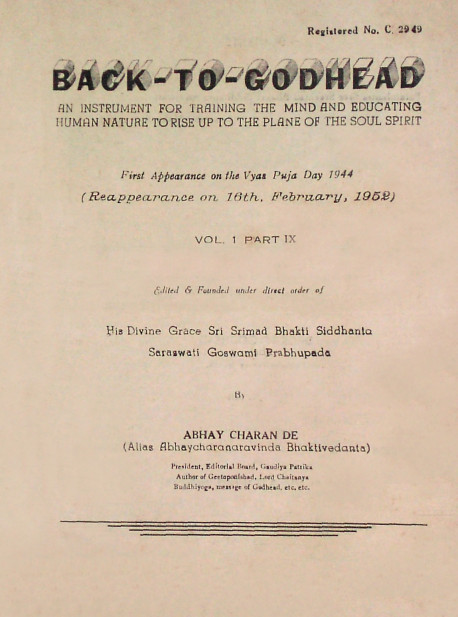 Adore adore ye all,
The happy day.
Blessed than Heaven,
Sweeter than May.
When He appeared at Puri,
The holy place,
My Lord and Master
His Divine Grace.

Oh! my Master
The evangelic angel.
Give us thy light,
Light up thy candle.
Struggle for existence
A Human race,
The only hope
His Divine Grace.

Misled we are
All going astray,
Save us Lord
Our fervent pray,
Wonder thy ways
To turn our face
Adore thy feet
Your Divine Grace.

Forgotten Krishna
We fallen soul.
Paying most heavy
The illusion’s toll.
Darkness around
All untrace,
The only hope
His Divine Grace.

Message of service
Thou has brought.
A healthful life
As Chaitanya wrought.
Unknown to all
It’s full of brace.
That’s your gift
Your Divine Grace.

Absolute is sentient
Thou hast proved.
Impersonal calamity
Thou hast moved.
This gives us a life
Anew and fresh.
Worship thy feet
Your Divine Grace.

Had you not come
Who had told,
The message of Krishna
Forceful and bold,
That’s your right
You have the mace.
Save me a fallen
Your Divine Grace.

The line of service
As drawn by you,
Is pleasing and healthy
Like morning dew.
The oldest of all
But in new dress
Miracle done
Your Divine Grace.

Om Vishnupada Sree Sreemad Bhakti Siddhanta Saraswati Goswami appeared in this mortal world in the year in February on as the third son of Srila Bhaktivinode Thakur known as Late Kedarnath Dutt in His early householder life. Srila Bhakti Siddhanta Saraswati was known as Bimala Prasad Dutt in His early life and from His very boyhood, inspired by His devotee father, lived a strict pious and religious life. One instance in His early life will prove how much He was rigid in His principle of religious way of life. The instance may be cited here as a matter of course. Srila Kedar Nath Dutta as an ideal Grihastha used to worship Sree Sree Radha Govinda Vigraha at his house. As such one day he purchased some good quality mangoes for the deity when Srila Bhakti Siddhanta Saraswati was a mere child. The child Bimala Prasad pretending the childish nature ate up the mangoes without the knowledge of His father. The father when he came to know that the mangoes purchased for offering to the deities at his house were swallowed up by his child Bimala Prasad, he mildly rebuked Him and warned Him also not to commit the mistake in future. The child Bimala Prasad took up this matter very seriously and as the proverb goes that child is the father of future men, so He proved Himself then as the future Acharya of the human community. From that day forward till His departure from this mortal world He remembered that mistake which He had committed in His early life and as a matter of self imposed punishment He never touched mangoes of any kind for His eating purpose. In His later life He was so many times requested by His thousands and thousands disciples to accept mangoes but He always reminded of His childish so called mistake and always quoted the instruction from the Ishopanishad that everything belongs to the Almighty God. No body therefore accept anything in this world unless the same has first been offered to Him (Almighty God).

Another instance of His early life may be stated here that when Bimala Prasad was on the lap of his beloved mother His father Late Kedar Nath Dutta was posted as Magistrate of Puri. The Car festival of Sree Sree Jagannathji took place at that time. The house was situated just near the main road through which the Car used to pass. So when the Car was moving it stopped all of a sudden in front of the house where Sri Bimala Prasad was on the lap of His mother. The Car of Jagannath stopped and did not move with utmost endeavour of the pulling devotees. The mother of Bimala Prasad took this opportunity and was helped to get up on the Car for Darshan of the Deity with her saintly son. The baby Bimala Prasad was then thrown on the holy feet of Sree Sree Jagannathji and at once the baby was blessed by the God as some flowers fell down on the baby from the hands of the Deity. After this incidence the Car began to move and every intelligent person present there could understand that the child Bimala Prasad was not an ordinary one. There are many such small but very significant instances from His very childhood which indicated Bimala Prasad to be a future great personality and it so happened that in His later age He became the most powerful Acharya in the line of Gaudiya Vaishnava Sampradaya in the disciplic succession from the Madhyacharya who was in the line of Brahma Sampradaya coming down Brahma the Creator of this Universe. There are four Sattawata or transcendental spiritual Acharya Sampradayas or fundamental schools of Theism such as the Brahma Sampradaya beginning from Brahma after His initiation from the Personality of Godhead; the Rudra Sampradaya beginning from Sankara or Mahadeva; the Shree Sampradaya beginning from Sreemati Luxmi Devi the Eternal Consort of Shree Narayana and the Kumar Sampradaya beginning from the Kumar namely Sanak Sanat Kumars. Sree Madhyacharya belonged to Brahma Sampradaya, Sree Ramanuja to the Sree Sampradaya, Sree Vishnuswami to the Rudra Sampradaya and Sree Nimbarka belonged to Kumar Sampradaya. All these four Acharyas are bonafide preachers of the pure transcendental philosophy dealing with the problems of the world, the living entities and the Almighty God who is the Father of the creation as well as the living entities who are falsely trying to dominate over the creation and the controlling energy known as the material Nature.

Sree Bhakti Siddhanta Saraswati Goswami Maharaj happened to be the tenth generation in the line of disciplic succession from Lord Chaitanya who accepted Srila Iswar Puri as His spiritual Master. Srila Madhabendra Puri was the spiritual Master of Srila Iswar Puri and He (Sri Madhabendra Puri) belonged to be in the disciplic succession from Madhyacharya who was direct disciple of Sree Vyasdeva. The Spiritual Master of Srila Vyasdeva was Srila Narada Muni who was directly initiated by Brahma the originator of the Brahma Sampradaya and therefore my spiritual Master Sree Sreemad Bhakti Siddhanta Saraswati Goswami Maharaj belonged to the transcendental spiritual school of philosophy of the Brahma Sampradaya linking Brahma to Vyasdeva; from Him to Madhyacharya, from Madhyacharya to Lord Chaitanya and from Lord Chaitanya to Himself in a systematic principle of disciplic succession as stated in the Bhagwat Geeta.

As a bonafide Acharya of the Brahma-Madhya-Gaudiya Sampradaya the mission of Sree Sreemad Bhakti Siddhanta Saraswati Goswami was to re-establish the pure form of theism as propounded by Lord Chaitanya in the line of His predecessors. Lord Chaitanya preached only the teachings of Bhagwat Geeta in the most practical way to suit the present environment created by the dark age of quarrel and fight. In the latter-age calculated to be two hundred years before the advent of Srila Bhakti Siddhanta Saraswati Goswami Maharaj many pseudo-spiritualistic parties in the name of Lord Chaitanya grew up like mushrooms to exploit the noble sentiment of spiritualism of the innocent people of Earth. Such pseudo-spiritualistic parties deviated poles asunder from the preaching of Lord Chaitanya because they were unfit to undergo the disciplic regulations and as such they had mitigated a via-media principle of rotten materialistic idea with pure spiritualism. They misunderstood the highest form of worship contemplated by the Gopies of Brindaban in the transcendental loving pastimes of Lord Shree Krishna and misidentified the spiritual process with a materialistic idea of erotic principle. As such the highest principle Rashlila stated in the Bhagwat to be understood and relished at the stage of the Paramhansas was made a plaything by such pseudo parties are known as the Oal, Baoul, Nera, Karta Bhaja, Sain, Darbesi Sakhi-vekhi, Sahajia, Caste Goswamins, Caste Brahmins and so on. These pseudo parties passed as the disciples of Lord Chaitanya with their cheap nefarious activities and of all the above parties the Sahajias and the Caste Goswamins became the most obstinate obstructors to the onward—progress of the universal movement of Lord Chaitanya.

The Philosophy of Lord Chaitanya was that God is One without a second. He is known as Shree Krishna but His incarnations such as Rama Nrisingha are all identical with Him. The living entities or Jivas are qualitatively one with Godhead but quantitatively they are innumerable but eternal servitors of the Supreme Personality of Godhead. The present materialistic activities of the Jivas are to be understood as the acts of Maya or illusion and therefore they are all waste of energy of the human being. The energy of the human being as also of other living being should therefore be directed under the bonafide regulations of the Acharya so the line of Lord Chaitanya and as such He vehemently protested against the principles of those pseudo transcendentalists now passed in the name of Lord Chaitanya.

The first and foremost task of Srila Saraswati Thakur was to excavate the holy birth-place of Lord Chaitanya at Sreedham Mayapur in the district of Nadia in West Bengal. To substantiate this preliminary act of His great future movement Srila Saraswati Thakur had to face tremendous difficulties offered by the caste goswamins at Nabadwip-because they apprehended a lawyer in that initial movement. The caste goswamins were exploiting and still are exploiting the religious sentiments of the common people in the name of Lord Chaitanya and presented themselves as so called relative and descendants of Lord Chaitanya and Lord Nityananda. Factually Lord Chaitanya or for the matter of that Lord Nityananda accepted nobody as their relative or kinsmen who were not devotee of the Lord. On the contrary Lord Chaitanya accepted Thakur Haridas, who happened to come out of a Mohammedan family, as the Namacharya or the most powerful authority for preaching the samkirtan movement which Lord Chaitanya inaugurated so arduously.

Lord Chaitanya, as it is stated in the Bhagwat Geeta or in other authentic scriptures, wanted to re-establish the Vaishnava Dharma on the real basis of spiritualism. He never deprecated the natural caste system but neither He approved of the birth-right caste system, which has degenerated into slut of anachronism. Lord Chaitanya opined that anyone who is well conversant with the philosophy of the Absolute Truth Shree Krishna, never mind what he is either a born Brahmin or Sudra or in the Ashram of a Sanyasi or Grihastha, is perfectly competent to act in the role of Spiritual Master. And He practically demonstrated this fact during His preaching work.

The caste goswamins assisted by the other pseudo-transcendentalists made a clique to check up the universal movement of Lord Chaitanya and made a business of dispatching those foolish followers to the kingdom heaven after having drawing a lumpsum amount for this priestcraft hooliganism.

Sree Sreemad Bhakti Siddhanta Saraswati Goswami Maharaj wanted to check up this pseudo-spiritualistic activities of the so-called followers of Lord Chaitanya and present the actual thing for acceptance by the general public religionists and modern philosophers for a critical study of the sublime gift of Lord Chaitanya. It is the honest belief of Srila Saraswati Thakur that people in general, modern philosophers and thinkers as also the religionists will be struck with wonder when they seriously make a study of the gift of Lord Chaitanya.

What was thought by modern leaders like Gandhi and Rabindranath was long long before thought by Lord Chaitanya not as a public leader of political aspiration but as the Father of all living entities. The movement of Lord Chaitanya is generally known as the Samkirtan movement which is a transcendental process of self-realisation by removing the dust of materialism on the mirror of human intelligence. The present problem confronting the human civilization is due to lack of a proper introspection of the goal of human knowledge.