These Books Initiate You Into The Transcendental science Of BHAKTI 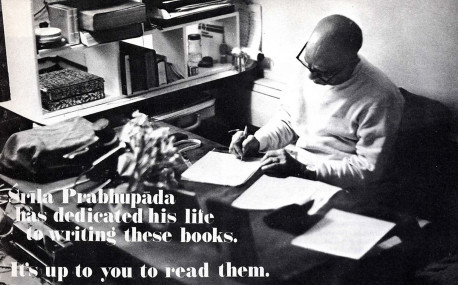 Easy Journey to other Planets 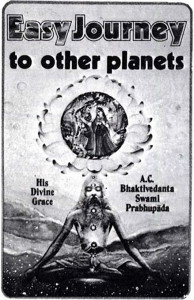 One can attempt to go to any planet he desires, but this is only possible by psychological changes in the mind or by yogic powers. Mind is the nucleus of the material body. Anyone who trains the mind to turn from matter to the spiritual form of the Godhead by performance of bhakti-yoga can easily attain the kingdom of God in the anti-material sky. Of this there is no doubt. 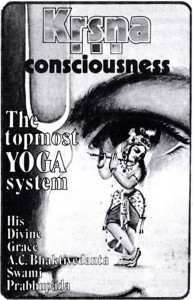 The Blessed Lord said: “The yogi whose mind is fixed on Me verily attains the highest happiness. A true yogi observes Me in all beings and also sees every being in Me. Indeed, the self-realized man sees Me everywhere. And of all yogis, he who always abides in Me with great faith, worshiping Me in transcendental loving service, is most intimately united with Me in yoga and is the highest of all.” (Bhagavad-gita, 6.27, 29, 47)

Srila Prabhupada has dedicated his life to writing these books.
It’s up to you to read them.

Bhagavad-gita As It Is

Bhagavad-gita has long been appreciated as a scriptural literature of sublime importance by thoughtful men throughout the world, for its eighteen chapters shower upon man the immortal nectar of the wisdom of the Absolute. The aim of this edition of Bhagavad-gita is to present the ancient science of yoga as presented by the speaker Himself, Lord Sri Krsna, without adulteration or interpretation. His Divine Grace A C. Bhaktivedanta Swami Prabhupada has accepted the Gita to be perfect and complete, and he has prepared his Bhagavad-gita As It Is with that understanding. Thus the message of this timeless classic is transmitted in its purity and fullness. By reading this book one can attain the perfection of human life. 318 pp., paperback, $2.95

Never before has this sublime text been available to the English-speaking world. Now ISKCON Press announces the forthcoming publication of Cantos 1 and 2 of Srimad-Bhagavatam in five richly illustrated hardcover volumes.

The science of God is greater than all other sciences, and this spiritual technology is rationally and authoritatively explained in the 18,000 verses of Srimad-Bhagavatam, India’s sublime contribution of culture, philosophy, politics, sociology, religion and love. His Divine Grace A.C. Bhaktivedanta Swami Prabhupada has undertaken the mighty task of rendering this supremely potent work into the English language along with Sanskrit transliterations, word-for-word synonyms and elaborate English purports. Thus in each verse one will find new enlightenment regarding the Absolute Truth, the origin of all emanations.
1775 pages, 60 full-color reproductions
Available in Spring, 1972 (Advance orders now)

KRSNA
the Supreme Personality of Godhead

Here, in two magnificent volumes, His Divine Grace presents the eternal, blissful pastimes of the Supreme Lord Sri Krsna as they are revealed in the Tenth Canto of Srimad-Bhagavatam, the ripened fruit of all Vedic literatures. The KRSNA Books. 750 pages of transcendental stories, richly illustrated with 82 full-color reproductions.
Vol. I, 400 pp., 58 illus., $6.95

The Nectar of Devotion

Nothing in this material world is so vast and variegated as the ocean of the nectar of devotion. Every feeling, emotion and relationship we find in this world is a limited, perverted reflection of the true, spiritual absolute. How to experience these pure spiritual emotions and relationships in direct conjunction with the Supreme is the subject matter of the most intimate and personal textbook in the world, The Nectar of Devotion, by His Divine Grace A.C. Bhaktivedanta Swami Prabhupada.
404 pp., hardcover $6.95, paperback $3.95.

Lord Caitanya’s most confidential teachings have been compiled and translated by His most dedicated follower, His Divine Grace A.C. Bhaktivedanta Swami Prabhupada. This is the text for advanced students of the science of love of God.
292 pp., 11 illus., hardcover $ 5.95, paperback $3.95

All the major scriptures of the world indicate that Godhead, or the Absolute Truth, is not impersonal, but is a person. Sri Isopanisad, in its eighteen mantras, describes the form and nature of the Absolute Truth. 137 pp., paperback, $1.95

Easy Journey to Other Planets $.95

Entrance into the realm of Krsna consciousness is gained through hearing transcendental sound vibrations from the pure devotee. This album by His Divine Grace features beautiful chants and prayers with the added benefit of a lecture on the nature of the absolute world. $5.00

An authoritative recording of His Divine Grace A.C. Bhaktivedanta Swami Prabhupada singing the Hare Krsna mantra and other transcendental chants. $4 00

Apple Records
Produced by George Harrison
This is a first recording of pure devotional songs in the ancient spiritual language Sanskrit. These eternal sounds of love release the receptive hearer from all contemporary barriers of time and space and reveal to him the realm of Krsna Consciousness. Apple, $4.95